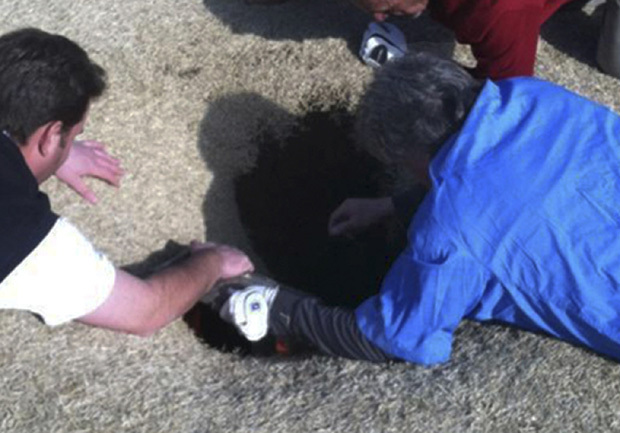 ST. LOUIS Suddenly being swallowed up by the earth on a golf course's fairway drove a wedge between Mark Mihal and a stellar round.

The 43-year-old mortgage broker was counting his blessings Tuesday and nursing a dislocated shoulder sustained four days earlier when he tumbled into an 18-foot deep sinkhole on the 14th hole of the Annbriar Golf Club near Waterloo, Ill., just southeast of St. Louis.

Friends managed to hoist Mihal to safety with a rope after about 20 minutes. But the experience gave him quite a fright, particularly following the much-publicized recent death of a man in Florida who died when his bedroom fell into a sinkhole. That man's body hasn't been found.

"The thoughts of being buried alive were running through Mark's mind because of that horrifying story," Mihal's wife Lori wrote on her husband's golf blog.

As for Mark, he called himself "lucky."

"I feel lucky just to come out of it with a shoulder injury, falling that far and not knowing what I was going to hit," Mihal, from the St. Louis suburb of Creve Coeur, told The Associated Press before heading off to learn whether he'll need surgery. "It was absolutely crazy."

Mihal said it was a real downer on what had been a fine outing.

With winter finally nearing an end, "it was the first day to get to play in a long time," he said. "So I wasn't expecting too much."

Golfing with buddies, Mihal was waiting to hit his third shot, some 100 yards from the pin on the par 5, when he noticed a bathtub-looking indentation about knee deep just behind him on the fairway. At just one over par for the round, the golfer with a 6 handicap was on a roll.

Mihal remarked about how awkward it would be to hit out of the odd depression, and then walked over to give it a closer look and took one step onto it.

"It didn't look unstable," he said. "And then I was gone. I was just freefalling. It felt like forever, but it was just a second or two, and I didn't know what I was going to hit. And all I saw was darkness."

His golfing buddies didn't see him vanish into the earth but noticed he wasn't visible, figuring he had tripped and fallen out of sight down a hill. But one of them heard Mihal's moans and went to investigate.

"He just thought it was some crazy magic trick or something," Mihal said.

Getting panicky and knowing his shoulder "was busted," Mihal assessed his dilemma in pitch darkness as he rested on a mound of mud, wondering if the ground would give way more and send him deeper into the pit.

"I was looking around, clinging to the mud pile, trying to see if there was a way out," he said. "At that point, I started yelling, "I need a ladder and a rope, and you guys need to get me out of here."'

A ladder that was hustled to the scene was too short, and Mihal's damaged shoulder crimped his ability to climb.

One of his golf partners, a real-estate agent, made his way into the hole, converted his sweater into a splint for Mihal and tied a rope around his friend, who was pulled to safety.

"I felt fortunate I didn't break both legs, or worse," Mihal said.

While disturbing, such sink-holes aren't uncommon in southwestern Illinois, where old underground mines frequently cause the earth to settle. In Mihal's case, the sinkhole's culprit was subsurface limestone that dissolves from acidic rainwater, snowmelt and carbon dioxide, eventually causing the ground to collapse, said Sam Panno, a senior geochemist with the Illinois State Geological Survey.

That region "is riddled with sinkholes," with as many as 15,000 recorded, Panno said.

The one Mihal survived has him debating whether returning to Annbriar is a long shot.

"It's a great course. I love the course," Mihal said, having played Annbriar a couple dozen times over the past decade. "But I would have a tough time probably walking down that hole again."

The 20-year-old course proclaims on its website that "each year new golfers are tested by our challenging 18 holes of golf."

There's no mention of its newest — and most challenging — hole.