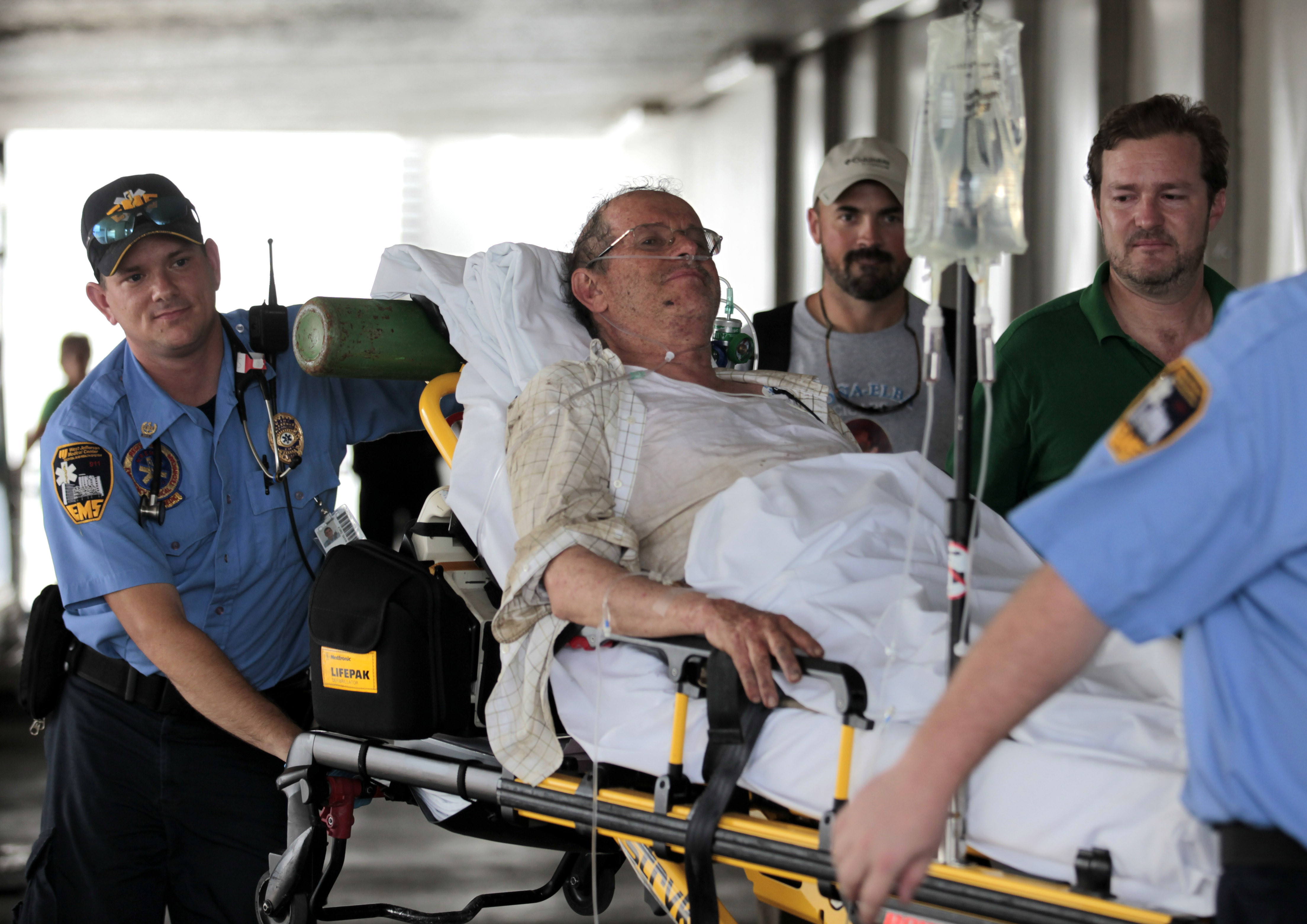 MARRERO, La. - Francisco Piedrahita, a 65-year-old head of a university in Colombia, said he heard searchers and called for help — and answered a shout in Spanish — the morning after he got lost in a Louisiana swamp. But it was three more days before he was found.

To survive, he said, he ate a few plant stems. "For drink I had to use urine," he told reporters Thursday evening, just before leaving the hospital where he was taken after a Jefferson Parish Sheriff's Office helicopter crew spotted him Wednesday afternoon.

Did he ever lose faith? "I tend to be optimistic and very rational," Piedrahita, of Universidad Icesi in Cali. His wife, Claudia, and sons Esteban, 39, and Vicente, 29, were in the room.

Piedrahita held a plush wood duck he was given by officials and staff at the Jean Lafitte National Historic Park and Preserve's Barataria Unit — 23,000 acres of swamp, marsh and forest near New Orleans where he got lost Saturday on a walk to photograph the brightly colored whistling ducks.

He said he had spent Saturday morning on the 2.5 miles or so of boardwalks and paved trails on one side of a two-lane highway, had lunch with the cabbie and then went to the park's Wood Duck Trail, part of about 6 miles of dirt trails on the other side of the road. People he had corresponded with by email told him the ducks frequented ponds about 200 yards from the end of the trail. But, he said, he learned later that the ponds had dried up.

Signs at every trailhead tell visitors to stay on the walks. A walk in the park "looked like no risk at all," Piedrahita said, but he was worried about losing his cell phone, so he had left the phone in the safe at the hotel where he was staying. When he took the dirt trail, he figured the fact that it wasn't built up meant there was no need for boardwalks, he said.

"I never thought of the swamps," he said.

He tried to make his way back to the trail, then to where he thought the parking lot was, and to traffic he heard on a nearby four-lane highway, using palmetto trees and white-flowered shrubs as markers. They petered out into the swamp.

"When it was this deep, it is no problem," he said, holding his hands about a foot apart. "But when it is this deep" — his hands closer to two feet apart — "it is a big problem."

"I could never find my way across what appeared to be the wider part of the swamp," he said.

Both forest and swamp were littered with dozens, maybe hundreds large, downed logs, he said. Some were rotten. He tried walking on top of some, balancing with two sticks.

"Some broke as I walked and I fell in the water and got back OK," he said.

Eventually, he found a tiny island — "a cypress log and some higher mud" about 3½ yards long. That was where he stayed, following the rule for lost people.

He had told the cab driver he'd be back in less than an hour. When two hours had passed, the driver flagged down a park ranger.

Park rangers searched until about midnight Saturday. Jefferson Parish sheriff's deputies joined the search Sunday and Monday. By Tuesday, the number of searchers had grown from about 50 to more than 100, including 16 from other parks around the country. Both park superintendent Carol Clark and Col. John Fortunato, spokesman for the sheriff's office, said there were no plans to ask Piedrahita to pay for the search.

"Sunday morning, when the sirens came ... it was my best feeling," Piedrahita said. "A half-hour after the sirens came, I heard a dog bark. I called, `Help! Help!' A guy answered in Spanish: `Donde esta usted?' — `Where are you?' I could just say, `Here! Here!"'

As time stretched on, he grew afraid.

"Time seems to pass and nothing happens or seems to be happening. I'd see one helicopter here, another there, but nothing else, and always far from me." He worried about how and when his wife might learn he was missing.

Mosquitoes, flies and the muggy south Louisiana heat tormented him. He could hear traffic "all day and all night" but didn't know how to get to it. He walked "from this tree to the other tree" and back again. He wrote little notes to himself. He photographed his immediate area, but didn't take many pictures because he was afraid the camera's battery would run out. The sheriff's office has the camera, he said.

When he was finally found and searchers quickly gathered around, he said, "I asked, `You are all for me?"' He said he was humbled by the response.

He made a remarkably quick recovery from dehydration, exposure, muscle loss, some gastrointestinal problems and kidney problems resulting from dehydration and little food, said Dr. Robert Chugden, head of the hospital's emergency department.

"There's no reason he needs to be in the hospital at this time if he doesn't choose to," he said.

Piedrahita plans to return to Colombia on Sunday.

Asked if he'll return to the park, he said yes. Will he stay on the trail? "Yes. And not (go) on that trail unless they guarantee the duck is waiting."