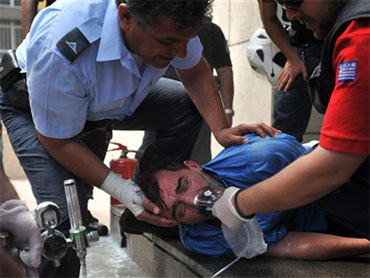 Greek police say a man has set himself on fire inside a bank in the northern port city of Thessaloniki to protest his financial difficulties.

The 54-year-old man was hospitalized with non life-threatening burns, and nobody else was injured.

Police said the man entered a central Piraeus Bank branch Wednesday, carrying a can of fuel, and asked for the loans official. When told the official was away, he poured fuel over himself and set himself alight. Police said the man claimed to have financial problems.

A Piraeus Bank statement said the man was a former client with a history of outstanding debts, which it wrote off in 2006 "due to his personal problems."

Greece is in the midst of a debt crisis, and many borrowers have trouble paying their loans.