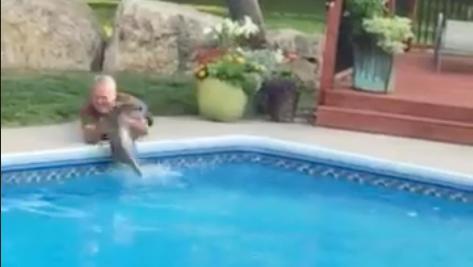 A baby deer and its mother wandered into a back yard in Augusta, Kansas, on Wednesday and the baby quickly found itself in trouble. When the young deer fell into the family's swimming pool, the mother ran away. But homeowner Walter Burress ran to the rescue.

Burress' wife, Diana, caught the whole rescue on video. "I had been outside about five minutes before and [the deer] wasn't in there," she told CBS News. "And then when I went out to water my plants I heard splashing." She turned around to see the baby deer flailing in the water, trying to stay afloat.

The video shows her husband running around the pool, quickly lying down on his stomach and reaching into the water to pull the struggling animal out. He swiftly plopped the deer on the pavement.

"Luckily, Walter was there and was very quick to react. He's helped birth a lot of calves so it was natural instinct I think," Diana Burress said. Her husband has worked on the Burress family farm his whole life and is used to being around animals.

After the rescue, her husband is seen walking the deer over to the edge of the yard. He set the deer down so it could run in the same direction its mother went. Burress says her husband estimates the baby deer was just a day or two old at the most.

The video of the rescue has gone viral online. "It's pretty cool, if you have the sound on the video you can hear a weird whistling noise in the background, that's the mama calling to her baby. She was definitely keeping an eye to make sure we saved the baby," she said.

After her husband brought the deer over to the edge of the yard, it didn't move. So Diana Burress walked around the pool to go check on it. The deer looked up at her with its big doe eyes as if to say "thank you," she said, then jumped up, seemingly unharmed. and ran into the woods beyond the house to go find its mother.