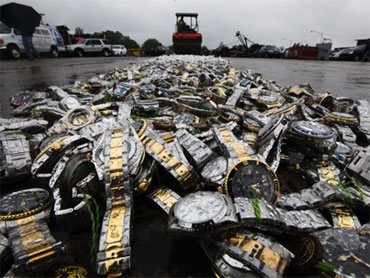 (CBS/AP) BRIDGEPORT, Conn. - For killing a man over a $5 fake Rolex watch, prosecutors are recommending that Connecticut man  Antwone Sharpe be given a real long sentence - 35 years in prison.

Sharpe, 21, pleaded guilty to felony murder, conspiracy to commit first-degree robbery and risk of injury to a minor, according to the Connecticut Post. A second man, Lawrence Perry, was also charged with the killing and currently awaits trial.

Police say that Sharpe and Perry, 19, shot Darrell Geyer in his apartment on April 13, 2011. His wife found him dead in a chair with their 14-month-old daughter curled up on his chest.

The victim's fake Rolex, reportedly worth $5, was missing, but police later found Perry's girlfriend wearing it.

Sharpe is scheduled to be sentenced on October 26.