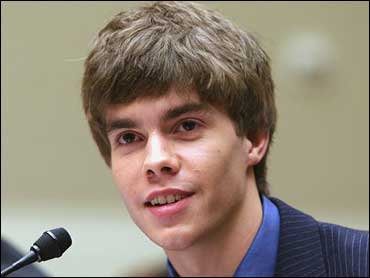 Authorities on Monday arrested a 28-year-old man who was accused at a federal hearing in April of molesting a teenage boy.

Ken Gourlay was arrested at his Detroit home and charged with 10 felony counts related to child sexual abuse.

His name surfaced during a U.S. House panel's investigation of the sexual exploitation of children over the Internet.

Justin Berry, 19, who for five years starred in his own Internet child pornography business, told the panel the Justice Department was moving too slowly to round up 1,500 pedophiles whom he had identified last year.

"With the help of my family and a psychologist, I now understand that my molestation by Ken was a turning point that set me on a path to self-destruction," Berry testified.

Gourlay, who was at the committee hearing, invoked his Fifth Amendment right against self-incrimination.

Mulak was charged with felony possession of child pornography, after authorities seized some 48,000 photos on Mulak's computer hard drive, some allegedly of underage boys, Attkisson reported.

Berry's story of a lonely teenager who sought friends on the Internet but instead grew rich attracting pedophiles was reported in December by The New York Times.

Gourlay was arraigned Monday in Washtenaw County and was being held on $500,000 bail.

A jail official said he could not relay a message seeking comment to Gourlay. He also said he did know whether Gourlay had a lawyer.