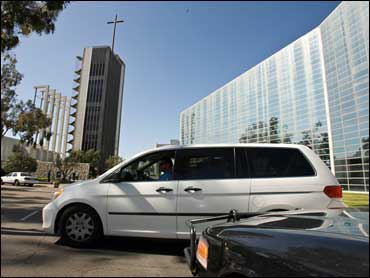 A man shot himself to death in front of a cross inside televangelist Robert H. Schuller's Crystal Cathedral on Wednesday as a group of Canadian visitors was being told about the church's suicide-prevention program.

The man entered about 9:45 a.m., handed a note and his driver's license to two ushers, walked to the cross and then shot himself in the head as he appeared to be praying, said Senior Pastor Juan Carlos Ortiz.

The Orange County coroner's office identified the man as Steve Smick, 48. Church spokesman Mike Nason said there was no record of Smick being a member at the cathedral.

Seven or eight tourists were inside the cathedral and witnessed the shooting, Ortiz said.

"The gentleman came in and I greeted him and said, 'Good morning, welcome to the Crystal Cathedral, where are you from?"' Spicer said. "And he said, 'Oh around here.' And then he handed me a note folded over with two cards inside and said, 'You may want this,' and he walked down the aisle hurriedly and he went to the foot of the cross. I thought he was praying."

Spicer said she opened the note and saw that one of the cards was a driver's license.

"I hardly remember the note except he said something about a pickup truck out in the parking lot - I guess from a friend, he borrowed it. And next thing we knew there was a pop and I stayed at the door. I didn't realize it. I thought he was praying," she said.

Manson said she was giving a tour and had her back to the man.

"I had just finished telling them about our intervention hotline that we have, suicide prevention on the fifth floor, and all of a sudden I heard this pop, a loud pop, it almost sounded like a firecracker," she said.

At first she thought it was one of the cathedral's glass windows shattering.

A tourist facing Smick instead told her that a man had shot himself.

After the shooting, police could be seen through the cathedral's glass doors investigating the scene and taking photographs before the body was removed. They also searched his pickup truck, Ellsworth said.

Cathedral spokesman John Charles said none of the tourists, who were from Canada, were injured. They left the scene about an hour after the shooting after being interviewed by police.

The shimmering, glass-walled megachurch in Orange County is home to the "Hour of Power" broadcast, an evangelism staple that has been on the air worldwide for more than three decades.

The main sanctuary of the 10,000-member church, the Crystal Cathedral, is a landmark designed by renowned architect Philip Johnson. Thousands make the pilgrimage to see where the broadcast is filmed before a live congregation.

There have been two other shootings at the church in recent years.

In December 2004, Crystal Cathedral Orchestra conductor Johnnie Carl, 57, killed himself at the complex after a standoff that began when he opened fire in offices before a Christmas pageant. He had been hospitalized for severe depression.

Also that year, a man was wounded by a plainclothes police officer in the cathedral parking lot. Authorities said the man was meeting his mother but the officer didn't know they were related and intervened in what he thought was an argument.