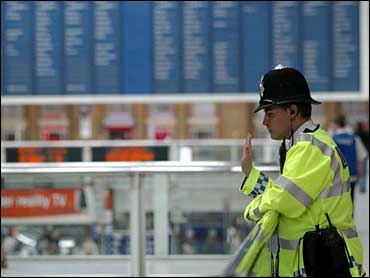 Police said Saturday that a man shot and killed on a subway car had nothing to do with an investigation into a series of bombing attacks Thursday on London's transit system and they called the death was "a tragedy."

Police have identified the man they mistakenly shot to death as Jean Charles de Menezes, a 27-year-old Brazilian citizen.

A Muslim spokesman said it was frightening that police had license to kill people on suspicion and that people would be afraid now to walk the streets or ride the subway.

The shooting Friday took place at a subway station in the southern London neighborhood of Stockwell.

But Scotland Yard said in a statement Saturday that "the man was unconnected to the incidents of Thursday 21 July."

Although they would not definitively rule out a connection with July 7, the announcement said the man, who has not yet been identified, was "probably unconnected" to the first bombings.

"For somebody to lose their life in such circumstances is a tragedy and one that the Metropolitan Police Service regrets," said a spokesman, who spoke on customary condition of anonomity.

A spokesman for the Muslim Association of Britain, Azzam Tamimi, said "people will be afraid to walk the streets now, to take the tube.

"I feared that we'd arrive at this conclusion," he told the British Broadcasting Corp. "To give license to people to shoot someone dead like that on the basis of suspicion is very frightening."

"The problem in this particular incident is that the person seems to be colored, seems to be Asian. Now he can be of any religion, from any roots or region. This will cause a great anxiety and concern," Tamimi said.

CBS News Correspondent Elizabeth Palmer reports that in the town of Aylesbury, someone tried to torch the house where one of the suicide bombers from the July 7 attack, Jermaine Lindsay, lived with his family.

Thames Valley Police said officers went to the unoccupied house in Aylesbury, 40 miles west of London after reports of a smell of gasoline in the street. They confirmed the presence of some kind of fuel.

More than 100 alleged revenge attacks have been reported since the first suicide bombings on July 7.

The man, described as being a South Asian, had emerged from a nearby house that was under surveillance because of a suspected link to Thursday's attempted attacks on three subway trains and a public bus. According to police, he was followed by officers.

At the station, he was challenged by police and asked to stop and witnesses said he ran into a subway car where officers shot him about five times at point blank range

However, in an announcement, Scotland Yard said that "we believe we now know the identity of the man shot at Stockwell Underground station by police on Friday, July 22, although he is still subject to formal identification. We are now satisfied that he was not connected with the incidents of Thursday, July 21, 2005."

It added that "the man emerged from a block of flats in the Stockwell area that were under police surveillance as part of the investigation into the incidents on Thursday, July 21.

"He was then followed by surveillance officers to the underground station. His clothing and behavior added to their suspicions.

"The circumstances that led to the man's death are being investigated by officers from the Metropolitan Police Directorate of Professional Standards."

Meanwhile, police said Saturday they had arrested a second man in connection with failed suicide attacks.

The Metropolitan Police said the second arrest late Friday was "in connection with our inquiries" into Thursday's attacks. The first suspect, whose identity has also not been released, was being questioned at a high-security London police station.

The force said it had had a good response to Friday's release of the photos, which were captured on closed-circuit surveillance cameras.

Thousands of officers conducted a huge manhunt amid hopes the publication of images of four suspected attackers would lead to their capture.

Police evacuated east London's Mile End subway station in a security alert and one witness reported the smell of something burning. The Metropolitan Police said officers were investigating a "security incident" at a station on the Central and District lines. They gave no further details, but the subway operator said service on parts of the two lines had been suspended by a "customer incident."

Passenger Miguel Clarke told the British Broadcasting Corp. that uniformed officers had evacuated the station and that the area had been cordoned off. Clarke said he smelled "something burning like rubber" inside the station.

CBS News Correspondent Richard Roth reports London police are calling on the public to be calm, despite a frantic manhunt that's put the transit system in chaos.