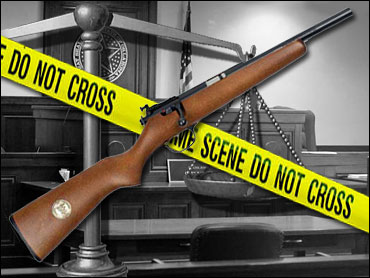 A man tried to shoot a woman inside a Rockland County courtroom, the wayward round striking a window several feet above a judge's head, police said.

Leo Lewis, who Ramapo police said was in his 60s and was in a domestic dispute with the woman, was arrested as he tried to flee the Sloatsburg courtroom following the Monday night shooting, said Detective Sgt. John Lynch.

A Ramapo officer who was in the courtroom for traffic court fired off a shot, then chased him down and, with the help of a bystander, tackled him, Lynch said.

"She (the officer) believed he was going to fire again. She fired one round at him and missed," Lynch said outside the courtroom. "And about midway into the parking lot here the officer and a civilian unrelated to the case were able to tackle him in the lot."

No charges had been filed against Lewis by Tuesday morning, but were expected, police said. They said they didn't know if Lewis had an attorney.

Shortly after 6 p.m., Sloatsburg Justice Thomas Newman called the civil dispute between Lewis and the unidentified woman to trial. As the trial prepared to open, Lewis, who was sitting in the row behind the woman, pulled a .22-caliber sawed-off rifle from an envelope and fired at her, police said.

After the round missed her and struck a few feet above where the judge was sitting, Lewis took off, followed by the officer, police said.

Rodney Van Dunk, a relative of the woman's boyfriend who was in the courtroom, said the scene was chaotic.

"This could have been a disaster," Van Dunk told the Journal News.

The courtroom, on the second floor of Village Hall off Route 17, has no metal detectors. A bid for security cameras and other safety measures was awarded about a month ago but does not include a metal detector, Sloatsburg Mayor Carl Wright told the Journal News.