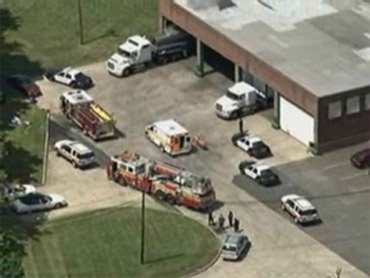 Authorities say a man has died after falling into a vat of melted chocolate in a New Jersey processing plant.

A spokesman for the Camden County Prosecutor's Office says the 29-year-old temporary worker at Cocoa Services Inc. plant fell after a blade used to mix raw chocolate hit him. The man's name has not been released.

The accident happened around 10:30 a.m. Wednesday as the worker was loading raw chocolate into the vat where it's melted and mixed before being shipped elsewhere to be made into candy products.

The victim was said to have been trapped in the vat for nearly 10 minutes before being freed, reports CBS station KYW. Officials said a preliminary investigation has revealed that the worker may have suffered a head injury while inside the vat.

Prosecutor's spokesman Jason Laughlin says a co-worker tried to shut off the machine and two others tried to pull the man out of the 8-foot deep vat.

Cocoa Services hires a second company - Lyons and Sons - to do the mixing.