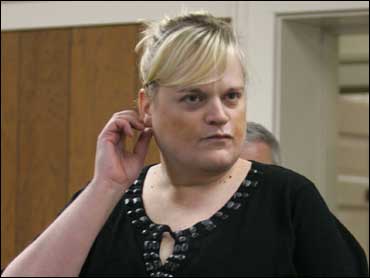 James M. Mason knew his wife since she was born a boy. The janitor and former military man was a boarder in the child's home and was treated like family.

Many were surprised when he married Chris nearly three years ago, not just because he knew she underwent sex-change surgery three years before, temporarily calling herself Christine Newton-John after the pop singer with the same last name. He was in his 70s, she in her 30s. He was mild-mannered; she had a domineering personality.

Then, last summer, there was another surprise: Chris Mason was accused of exercising her frail husband to death so she could inherit his retirement benefits, in an attack caught on surveillance video.

Police say she forced James Mason, who had heart disease, to do stressful activity in an indoor pool for more than two hours. He collapsed and died the next day after Chris Mason authorized his removal from life support.

She was sentenced Friday to four years in prison after pleading guilty earlier to reckless homicide.

"It's just been a total nightmare," said Maryanne Vallandingham, Chris Mason's mother, who is ill with emphysema and distraught over her daughter's fate and the death of a close son-in-law.

Although the tale of James and Chris Mason didn't begin as a nightmare, the relationship always was considered unusual. The marriage seemed not much more than a living arrangement, said Chris Mason's sister, Cathy Vondrasek, who learned of it only after the two were wed.

"I never knew of them to be romantic," she said. "Jim was always like an uncle to us."

Her sister is domineering, "although I hate to say it," while James Mason was very gentle and laid back, Vondrasek said.

James Mason, 73 when he died in June, first met his wife's family in 1963 when he became a boarder at Vallandingham's home. Four years later, his wife was born as John Leslie Vallandingham.

Chris Mason, now 41, is a former health care aide for the elderly. In 1983, a decade before her sex-change operation, she decided that she and Mason should be together, she told police. The couple were living together at the time, but didn't marry until Aug. 18, 2006.

They lived in Middlefield, a village within a northeast Ohio area best known for its Amish community, for about four months. Chris Mason's mother lived with them for much of that time.

Vallandingham, who was present during the attack that killed James Mason but told police she didn't see any harsh treatment, does recall previous conflicts between the couple.

She told police she once saw her daughter flip a chair while James Mason was sitting in it, putting a hole in a wall. She said she saw James Mason standing with his nose to a wall in the corner of the living room because, he told her, his wife had ordered it.

Neighbors at times heard yelling and objects being thrown in the couple's apartment and complained to a Geauga County social service agency that checks on the safety of the elderly, said Middlefield Police Chief Joseph Stehlik.

"They both had good days and bad days," Vallandingham said. "Some things Chris did, well ... Chris needs help," she said, adding that her daughter once was a crack cocaine user.

"I'd rather not be painting an ugly picture," Vallandingham said. "She did love and care for Jim in her own way, and he loved her. Jim was a very loving and caring person."

Chris Mason told police that she didn't intentionally kill her husband and that they were in the swimming pool at their apartment complex so he could exercise.

A security videotape shows Chris Mason pulling her husband by his arms and legs on June 2, tossing and dunking him. Sometimes he clings to the side of the pool and his wife pulls him away. She appears to block his path as he tries to get out of the water — 43 times, by the police chief's count.

At other times James Mason gets out but goes back in. He doesn't swim but walks slowly in the 3-foot-deep end of the pool.

James Mason, who had coronary artery disease, suffered a heart attack. An autopsy shows that his major arteries had potentially fatal blockages of about 75 percent, Geauga County Coroner Kevin Chartrand said. It was fine for James Mason to exercise, but the condition of his heart made strenuous activity a risk, Chartrand said.

Shortly before Mason collapsed in the pool, Vallandingham had told Chris Mason she was moving out.

"I love Chris with all my heart, but I can't live with her," she told the AP.

Troubles continued after James Mason's death. His widow was involved in a bar fight in December and was jailed after her personal bond was revoked, said Prosecutor David Joyce. She was banned from another bar she frequently visited.

"She was getting obnoxious, and the owner told her she had to stay out of here," said Tracy Hall, a bartender at Middlefield Tavern. "She liked to flirt with all the guys who come in here."

She wasn't working at the time of her husband's death. James Mason, a retired janitor who had served in the Army and Air Force, had Veterans Affairs benefits, Social Security and possibly other retirement assets, according to the police investigation.

Police Chief Stehlik had expected a murder charge, convinced that Chris Mason knew her husband had a weak heart and that she would get VA benefits and Social Security as his widow. He said she did receive benefits of more than $860 a month from the VA and at least one retirement account.

But because there is no audio on the security video, the grand jury could not know what the couple said to each other, Joyce said. They do not appear to be arguing. He does not appear to be fighting her off. She was indicted on a charge of reckless homicide, a third-degree felony.

Vondrasek said she and Chris Mason both wept as James Mason died.

"She had him cremated, and she called and told me to come and pick up the ashes and do something with them," said Meyer, of Seville in northeast Ohio. "She was pretending to be a grieving widow."

Meyer said she arranged her brother's funeral. Chris Mason did not attend.