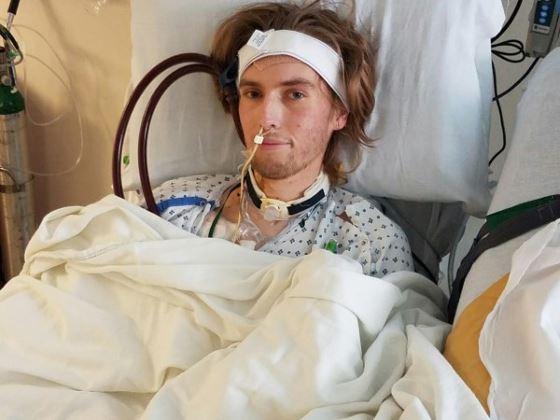 A young man from Utah who was initially denied a life-saving transplant after he tested positive for marijuana last year has died, according to his family.

Riley Hancey did eventually get a lung transplant in an operation just four weeks ago at the Hospital of the University of Pennsylvania. But that was months after the University of Utah Hospital denied him a spot on the transplant list because he tested positive for THC – the chief intoxicant in marijuana, Hancey’s family said.

Hancey was just 19 when he was hospitalized right after Thanksgiving after coming down with a severe form of pneumonia that caused his lung to collapse.

After being turned down for a transplant in Utah, Hancey’s family searched for another hospital that would do the life-saving operation. The Hospital of the University of Pennsylvania performed the procedure on March 29.

While the family was hopeful after he received the new pair of lungs, Hancey’s condition soon took a turn for the worse.

On Saturday, his family announced he had died.

“It is with heavy hearts, we are devastated to announce that Riley Hancey passed away from complications of a lung transplant,” a statement reads on the fundraising site YouCaring.

Hancey’s family described him as a “healthy teen” engaged in summer and winter sports. He worked for his brother at a ski resort and loved to travel.

His father said the teen had smoked marijuana on Thanksgiving night with friends but had been drug-free for a year before he got sick.

The University of Utah Hospital could not comment on Hancey’s case specifically, but told CBS News that they use different guidelines for the transplantation of different organs based on the difficulty of the surgery, the risk of rejection and the ability of a patient to adhere to a strict post-operative care plan.

“Generally speaking, we do not transplant organs in patients with active alcohol, tobacco or illicit drug dependencies or abuse until these issues are addressed, as these substances are contraindicated for a transplant,” the hospital said.

In a statement, Hancey’s family thanked the doctors and staff at both University of Pennsylvania and the University of Utah hospitals, as well as the donor family.

“It has been a long battle to save Riley’s life,” Hancey’s family said. “We know that in our hearts we gave him every opportunity to survive. He will live in our hearts forever.”