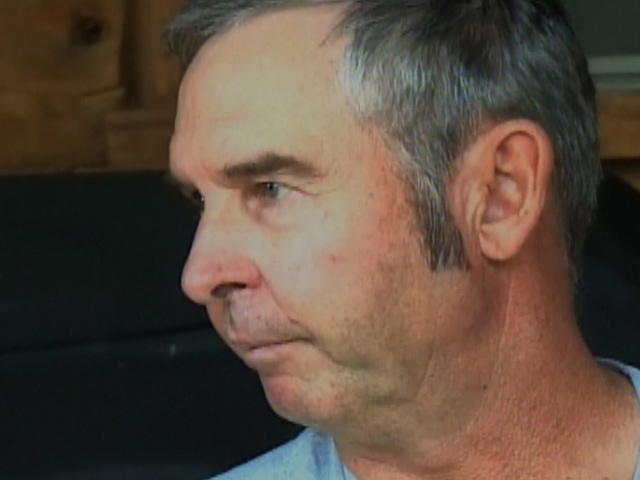 DENVER -- Jon Hutt was doing logging work all alone in a remote Colorado forest when his six-ton trailer fell onto his right foot.

The pain was excruciating, no one was around to hear his cries for help, and he couldn't free himself from the big piece of equipment. So he pulled out his 3-inch pocket knife and cut off his toes to get free.

Hutt then climbed into his semi tractor-trailer, his foot wrapped in a shirt, and began driving for help. Hutt's ordeal was first reported in the Grand Junction Daily Sentinel.

Hutt, who runs a crane business and does logging "for fun," had gone into the woods by himself on Aug. 19 to retrieve a pile of fallen aspen trees to cut for winter firewood. A trailer that was attached to his truck slipped and landed on his foot.

The wiry, 180-pound man told The Associated Press he began cutting off his toes about 30 minutes later when he realized no one could hear his cries. Hutt said he couldn't reach his cell phone, which was in his truck and out of range anyway.

Hutt told his wife he would be back in several hours from a job 50 miles away, but he did not know when she might start searching for him.

"I cut off my boot to see my foot, and once I realized how bad it was, I started cutting off my toes," Hutt said.

He feared he'd go into shock before he could take action, Hutt told CBS affiliate KREX in Grand Junction, Colo.

Once he freed himself, Hutt stopped the bleeding with the shirt and drove toward his home outside Montrose, about 175 miles southwest of Denver. He called for help once he was in cell phone range. An ambulance met him on the way.

Hutt said authorities retrieved his severed toes and took them to the hospital, but doctors said the toes couldn't be re-attached because they were too badly mangled.

"They told me there was no hope for them. They said there was nothing to attach the toes to," he said.

Instead, doctors sewed his foot shut and wrapped it in bandages. Doctors warned him he may face more surgery.

Hutt, who has also worked as a miner, ran a saw mill, built log houses and grew up on a ranch, said his wife met him at the hospital and asked him if he was OK.

"There was no crying or whining," he said.

Hutt even managed to chuckle over his ordeal, telling KREX, "If ya gotta lose something, it might as well be your toes!"

His wife, Margaret, said she didn't worry because she knew her husband might be gone for most of the day, but she started shaking when she got a message he left on her cell phone: "Please call, I cut my foot off."

She said she was only slightly relieved when she found out it was his toes.

Hutt said he never thought about the 2003 ordeal of Aaron Ralston, who amputated his right arm after it was pinned beneath a boulder in a Utah canyon, until someone reminded him about it at the hospital.

Ralston's story became the subject of the movie "127 Hours."