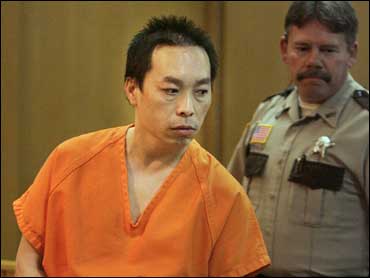 A jury on Friday convicted an immigrant truck driver of first-degree murder in the shooting deaths of six deer hunters during a confrontation over trespassing, rejecting his claims that he fired in self-defense after one hunter used racial slurs and another shot at him.

Chai Soua Vang, 36, faces mandatory life in prison. Wisconsin does not have a death penalty.

The two survivors of the shooting had testified the white hunters never shot at Vang before he opened fire after they confronted him on Nov. 21 about trespassing in a tree stand on private property in the isolated northwestern Wisconsin woods.

The jury deliberated about three hours before convicting Vang on six counts of first-degree intentional homicide and three counts of attempted homicide.

Vang, dressed in a business suit with family members seated behind him, showed no visible emotion as the judge read the verdict.

The crime rocked the north woods in part because four of the victims were shot in the back and all but one were unarmed, according to testimony.

The slayings also occurred during the state's beloved deer hunting season and exposed racial tension between the predominantly white north woods and immigrants from the Hmong ethnic group of Southeast Asia.