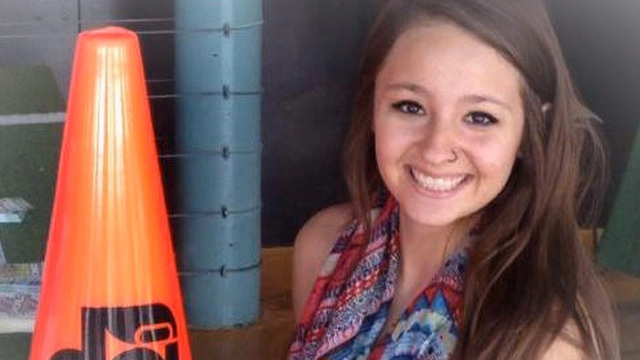 On Tuesday morning, Cpl. Eric Jamal Johnson was taken into custody by the U.S. Marshal Service in Yuma, Arizona, at a Marine Corps Air Station where Johnson serves in a squadron that conducts weapons and tactics aviation training.

Johnson was taken into custody after a warrant was issued in connection to the alleged shooting in Denton, Texas.

Mutschlechner was shot while acting as the designated driver taking three passengers home from a New Year's Eve party.

A dark-colored SUV with several people inside allegedly approached her vehicle and the occupants of both vehicles began arguing, according to CBS DFW.

As both vehicles began driving away, someone in the SUV opened fire at the car Mutschlechner was driving, hitting it several times.

Mutschlechner's vehicle slammed into another car before crashing into a utility pole.

The 20-year-old was taken to Denton Regional Medical Center with a bullet-wound to the head and died after being taken off life support, CBS DFW reported.

Witnesses told police that five or six men were inside the SUV at the time of the shooting, and at least two of of them had attended the same New Year's Eve party as Mutschlechner and her friends.

Hundreds of people stood outside the Greek Life Center to pay tribute to the young woman at a candlelight vigil for Mutschlechner over the weekend on the University of North Texas campus, according to the station.