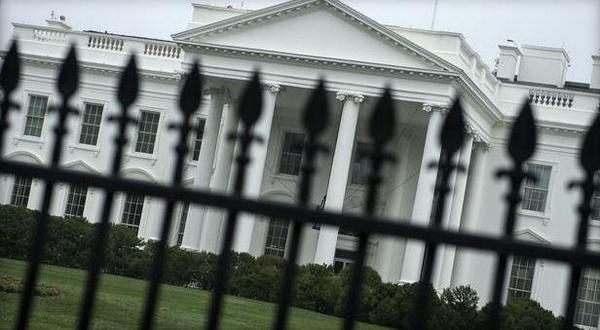 WASHINGTON - The Secret Service has apprehended a man who jumped over the White House fence.

CBS News correspondent Mark Knoller reported the individual jumped the fence about 7:16 along the White House North Lawn and is now in custody. It's the 7th fence jumping incident this year according to the Secret Service.

The man has been identified as Dominic Adesanya, 23 , from Bel Air, Md. , the Secret Service said. Adesanya was unarmed at the time of his arrest and charges are pending.

Two Secret Service dogs were taken to a veterinarian for injuries sustained during the incident.

The White House was locked down for about an hour and 35 minutes after the incident began.

Video showed Secret Service agents surrounding the man on the north lawn of the White House, which was put on lockdown, according to Reuters. The man was transported to a local hospital, but the nature of his injuries was unknown.

Video of the incident Wednesday night taken by TV news cameras shows a man in white shorts just inside the White House fence on Pennsylvania Avenue. The video shows the man lifting his shirt as if to show agents that he has no weapons. The man is then seen kicking and punching two Secret Service dogs that were released on him.

Prior to this incident the most recent episode of someone scaling the White House fence was that of Omar J. Gonzalez, 42, who was arrested Sept. 19 when he climbed over the north fence of the White House. An officer with the U.S. Secret Service ran toward him and yelled at him to stop. Instead, Gonzalez ran toward the White House and entered the building through the north doors.

He was apprehended inside the White House after he allegedly assaulted, resisted or impeded two U.S. Secret Service officers. He appeared in court on Tuesday, where it was determined he was not fit to stand trial due to mental issues discovered in an Oct. 17 screening. Another psychological evaluation was ordered. He is due back in court Dec. 3.

The fallout from that September incident and other Secret Service breaches in security for the president led Julia Pierson to step down as director of the agency. After Pierson resigned, an agent who once led Obama's protective detail came out of retirement to lead the Secret Service until Obama names a new director, pending the completion of internal and independent reviews of agency practices.