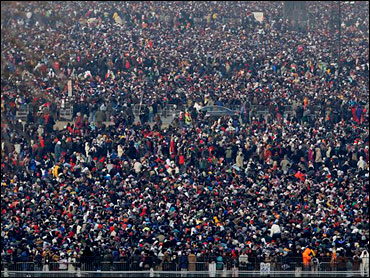 (AP Photo/Elise Amendola)
The inaugural ceremony is still a couple hours away, but the National Mall – east of 14th street, anyway – is already full.

Around 9:00 AM, CBS News correspondent Kimberly Dozier reports, the U.S. Park Police said the area between the Washington Monument and the Capitol was completely full.

Authorities say that anyone heading to the ceremony should now plan to enter the Mall grounds west of 14th street. They said they will "continue to monitor the crowds."

In other crowd news, a 68-year-old female fell onto the Metro tracks at 9:25 a.m. this morning at D.C.'s Gallery Place-Chinatown station on the Red Line.

"Riders can expect major delays while emergency personnel respond to the scene," Metro said in a statement. There is presently no Red Line train service at Metro Center or Gallery Pl-Chinatown Metrorail stations.

The situation adds to the transportation nightmares facing the millions who came to the city to celebrate Barack Obama's inauguration.

UPDATE: The woman, who was apparently not hit by a train, has been transported to an area hospital with non-life threatening injuries. The Red Line has reopened, but major delays continue.

UPDATE: Metro has put out a statement saying yesterday was its largest weekday ridership day ever, with 866,681 trips. Trains are even more crowded today.