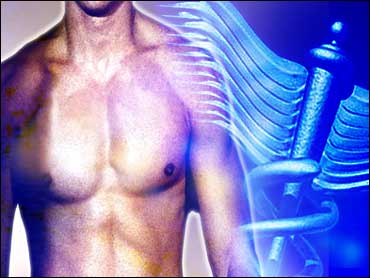 Our email inboxes fill up every day with advertisements for pills, ointments, supplements, and contraptions aimed at enhancing penis size, sexual stamina, or libido. It's a testimony to men's abiding insecurities about sexual performance. The question is, do any of these "male enhancement" techniques really work?

Richard, a mechanic from upstate New York, is a muscular, athletic guy. He has a loving wife who has always enjoyed their sex life. But ever since he was a young boy, Richard couldn't get over the feeling that his penis was too small. In public bathrooms, he'd use the handicapped stall. He felt embarrassed in gym locker rooms and when standing naked before his wife. "I didn't feel manly enough," he tells WebMD.

Then, in the back of a weightlifting magazine, he saw an ad for the FastSize Extender, a device that claims to make the penis longer and fatter through traction. Richard began wearing the device almost eight hours a day, every day. He was shocked to notice a difference within a few days. After four months of wearing the device, he says his flaccid penis has stretched from 3 inches to over 5 inches; erect, he has gone from less than 6 inches to over 7 inches. The device cost $298, but Richard says the effect on his self-confidence has been priceless: "It made a world of difference to me."

The FastSize Extender, though not extensively tested, has received some validation from mainstream medical sources. But that makes it a true rarity among the nonprescription methods of male enhancement. Most are a waste of money, and some are downright dangerous, doctors say.

Instead of furtively turning to untested methods, men with persistent concerns should consider opening up about them with their doctors. That's because performance problems sometimes act as an early warning signal for serious health problems. Your doctor might be able to prescribe something that can really help, or least provide a valuable dose of perspective about what constitutes "normal" sexual performance.

Links Between Sexual And Overall Health

Sexual performance declines naturally as men age, doctors say. But a rapid or severe decrease in performance or libido can be a red flag. Most importantly, erectile dysfunction may be an early predictor of heart disease.

Atherosclerosis, a condition in which fatty deposits build up inside arteries, may restrict blood flow to the penis and cause erection difficulties. "The small blood vessels that go to the penis can become diseased much earlier than the [larger] vessels that go to the heart," Karen Boyle, M.D., a urologist at Johns Hopkins School of Medicine, tells WebMD. "In younger or younger middle-aged men, ED is often the first sign of atherosclerosis."

For men with ED who are at risk of heart disease, prescribing Viagra or its cousins isn't enough, Boyle says. These men should be also be controlling their weight and cholesterol level, limiting their alcohol intake, and quitting smoking. Evidence shows that these changes in themselves can have a positive effect on sexual function, Boyle says.

Sometimes men with erection problems or a diminished libido have low levels of testosterone, Boyle says. Testosterone deficiencies can also affect mood and energy levels. Boyle tests for testosterone levels and prescribes it as a topical gel, though she warns it is only safe when prescribed and monitored by a physician. Nonprescription testosterone, such as the kind used by some bodybuilders, is dangerous, she warns.

For men with performance issues who are physically healthy, Boyle often prescribes counseling, such as marriage counseling for men with relationship issues or psychiatric help for men who are preoccupied with a problem in penile appearance. For young men with sexual performance problems and no signs of physical problems, Boyle may prescribe counseling and a low dose of Viagra as they work out issues of insecurity. "They need reassurance from a physician that everything is OK," she says.

The Quest For A Bigger Penis

The FastSize Extender device promises results, but it's far from quick and easy. Just ask Bob, a retail manager from New Jersey. He says he's gained over 2 inches of erect length. All it took was 25 months and over 2,600 hours wearing the device, typically five hours a day, seven days a week. "I was afraid my girlfriend would think I was a freak, but she was supportive because she felt a difference in her satisfaction and I felt more confident in myself," Bob tells WebMD.

Richard, the mechanic from New York, got results faster than Bob, but still wore the device under his clothes for about eight hours a day. Richard's wife has also been supportive. "I see a more confident man in front of me from using this product," she says. She also says the lengthening has enhanced their sex life, though she had no complaints before.

Chicago urologist Laurence A. Levine, M.D., director of the male fertility program at Rush University Medical Center, tested the FastSize Extender on 10 men afflicted with Peyronie's disease, which can cause bending and shrinkage of the penis. At the end of the six-month study, which was funded by the maker of the FastSize Extender, Levine found increased penile length and reduced curvature in every man and increased girth in seven of the men. Calling the results "remarkable," Levine now prescribes the device to many of his Peyronie's patients and reports no significant complications. (Levine has also worked as a paid consultant to FastSize Extender.)

Could FastSize work on men of normal penile length? Levine says it might. "If a woman can have a breast enlargement and it makes them psychologically feel better," he reasons, "then perhaps we should have the same thing for men."

Penis-lengthening surgery is also an option for men, but it is a highly controversial procedure. The American Urological Association says a common form of lengthening surgery (involving cutting the suspensory ligament of the penis) has not been shown to be safe or effective. The group also refuses to endorse surgeries that inject fat cells in the penis with the goal of increasing penile girth.

Many doctors question whether the benefits of lengthening surgery outweigh the risks. A 2006 study found that only 35 percent of men were satisfied with the outcome of surgery, which added only half an inch, on average, to length. Men who are overly preoccupied with penis length tend to have unrealistic expectations of surgery and should seek counseling instead, the authors wrote.

But many doctors are wary of traditional medicines. When Boyle's patients come to her with bottles of herbal supplements, she tells them she cannot vouch for their safety or effectiveness unless the FDA has reviewed the claims on the label.

The Way to Happiness in Bed

The Internet is rife with scammers who seek to prey on men's insecurities, Levine says. "All the pills, topical creams, and gels are worthless. Many men would clearly rather spend $20, $50, $100 on the Internet than go to the doctor and get real information."

In some cases, men are harming themselves in the pursuit of a bigger penis. Levine cites "jelqing," a technique involving hours and hours of intense stroking. He says he has patients who have developed Peyronie's disease due to violent stretching of the penis through jelqing.

It's ironic that the male preoccupation with enhancement seems to be independent of the needs of women, the supposed benefactors of improved sexual performance. A recent study found that 85 percent of women are pleased with their partner's penis proportions, but 45 percent of men say they want a larger penis. Given that the vast majority of men fall within a certain penis size - about 5.5 to 6.2 inches long when erect - most men fall within the normal range.

And there's plenty of debate on whether size matters at all. The most sensitive nerves in the vagina are found close to the surface, Lamm notes, and the clitoris is found on the vagina's outside. So there should be plenty of ways to satisfy your partner that have nothing to do with pills, creams, surgery, or devices.
By Richard Sine
Reviewed by Louise Chang, M.D.
© 2007 WebMD, Inc. All rights reserved