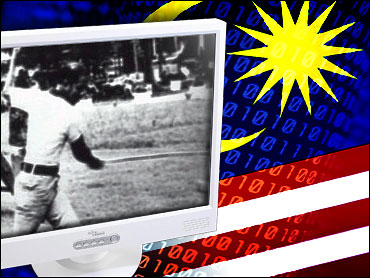 A Malaysian minister defended the country's use of corporal punishment on Wednesday amid protests from lawyers after a video clip surfaced on the Internet showing a prisoner being caned until he started bleeding.

The Bar Council, which represents 8,000 lawyers in Malaysia, earlier this year called for corporal punishment to be abolished.

The council stepped up its call after highlighting a "gory" video clip on its Web site over the weekend of a prisoner, whose face was not shown, being caned repeatedly even after his skin split in a bloody mess.

"We are against the death penalty and corporal punishment. It's against all international human rights norms and the various conventions on torture," council president Ambiga Sreenevasan told The Associated Press. "It's inhumane and degrading."

The opposition Democratic Action Party has called for an investigation into how the video was leaked, saying the image of the country has been tarnished.

But Deputy Internal Security Minister Fu Ah Kiow said the video clip was recorded at a local prison several years ago and now used in drug prevention and other anti-crime campaigns.

He said he didn't know how the video was made public, but added that its existence was "no big deal."

"The video is a means to educate the public and to show how hideous caning can be. It is deterrence for drug traffickers and drug addicts," Fu told the AP.

"Somehow somebody duplicated it and posted it on the Web site, but it's not done by our officials. The video is for education and training purposes, there's no big deal about it."

Caning is lawful in Malaysia for various offenses, including drug crimes, rape and illegal entry into the country.

Fu said caning was done according to proper procedure, including medical checks before the caning and treatment after the punishment.

"Let's not be hypocritical about this. Look at the harm done to victims of drug pushers and drug users, and the increase in violent crime," he said. "We must show more concern to the victims than to the convicts."