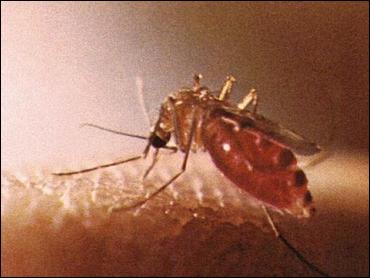 Medical workers in Indonesia's tsunami-devastated province of Aceh say they are observing the makings of a potential health catastrophe: The largest set of mosquito breeding sites the nation has ever seen is boosting the possibility that malaria deaths in the tsunami zone could top 100,000, according to the leader of anti-malaria efforts in the region.

The threat of cholera and dysentery outbreaks is diminishing by the day because clean water is increasingly getting to tsunami survivors, but the danger of malaria and dengue fever epidemics is now beginning to skyrocket, said Richard Allan, director of the Mentor Initiative, the aid group anchoring the malaria campaign on Sumatra island.

Health agencies involved in fending off a looming disease wave in the area hardest hit by the Dec. 26 earthquake and tsunami disaster moved into high gear Thursday in their pre-emptive strike against malaria, which Allan said could kill 100,000 people or more in the next few months across the Indian Ocean tsunami zone if control measures are not implemented promptly.

"The combination of the tsunami and the rains are creating the largest single set of (mosquito) breeding sites that Indonesia has ever seen in its history," he said in an interview with The Associated Press.

Asked about World Health Organization warnings that disease could double the tsunami death toll across affected areas, Allan said: "If anything, I think they are being conservative. Three-quarters of those deaths could be from malaria."

The risk of malaria only starts to escalate at least a week or two after the tsunami because the disease-carrying mosquitoes breed in fresh, stagnant water.

Although tsunami water has been standing everywhere for more than two weeks, it has been sea water and not suitable for the breeding of malaria-carrying mosquitoes. The region is just now entering the rainy season, rapidly diluting the salt water. After a week of rains, most of the standing water is now brackish, or half salty, half fresh. The mosquitoes love water ranging from brackish to fresh.

Although malaria is endemic in the area, meaning it is widespread under normal circumstances and the local population is used to getting repeatedly infected, that does not provide protection from any outbreak that might emerge from the tsunami.

"They are even more likely to get sick. A lot of them have already got diarrhea, poor nutrition. They are stressed, they've got multiple infections already and their immune systems are weakened," Allan said. "Any immunity they had is gone."

The World Health Organization said Thursday that seven cases of malaria have so far been confirmed in the area. They are popping up now both because malaria season is just beginning but also because systematic detection has only been put in place in the last few days as part of the effort to monitor outbreaks in the wake of the disaster.

The classic malaria prevention approach of distributing pesticide-impregnated bed nets to communities will not be part of the effort to protect the local population because there is a world shortage of nets, they are bulky to transport if they are available and, in an emergency situation, it's difficult to teach the people how to use them properly, Allan said.

He said persuading the local population to take an anti-malaria pill every day also is not practical. The best option, he said, is to use strategies that don't depend on survivors changing their normal habits.

The cornerstone of the anti-malaria offensive that kicks off Friday consists of an insecticide spraying operation, where fumigators will walk from house to house in all neighborhoods of the regional capital of Banda Aceh. They will spray the walls and put a small chalk mark on the outside of the front door as they leave so that no homes are left out and locations covered can be accurately mapped.

The tents in the refugee camps dotted around the city will also be sprayed, but those are home to only a tiny fraction of the population. Most people have been taken in by other families.

In communities along the west coast of Sumatra where almost all buildings were wiped out, the main defense will be pesticide-impregnated plastic sheeting, which villagers use for shelter.

"This will be the first situation where there is an incredible threatening epidemic and where if we get everything in place without obstruction ... we have a chance of stemming the starting point of an epidemic which otherwise will undoubtedly happen," Allan said.

"If we do that, we will stop the high-level severe cases that otherwise would dominate the field clinics and hospitals probably all the way back to Jakarta," he said. "If we don't get it in place, we will have an epidemic and you will have a very high caseload of severe malaria cases, and then you get a high death rate."

Malaria is now expected to be a more looming threat than cholera, dysentery, typhoid and other waterborne diseases that usually tend to spring up in the days immediately after a disaster, when clean water is scarce. These diseases, which can be deadly, come from drinking water contaminated with feces.

"So far, we seem to have largely escaped. It doesn't mean it's over, but as every day goes by they establish more and more access to clean water and these outbreaks get less and less likely," Allan said. "The risk never goes, but it diminishes."