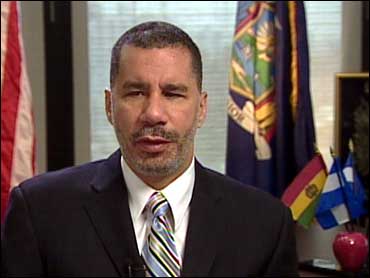 America's newest governor has recently completed his first 100 days in office - David Paterson of New York. And perhaps his greatest accomplishment is changing the way we look at the disabled. The governor has only limited vision. But that didn't stop him from finding his way to the top, he tells CBS News anchor Katie Couric.


"What do you think, Gov. Paterson, is the greater milestone: becoming New York's first black governor, or being its first legally blind governor?" Couric asked.

"That's a very difficult question," he said. "We had a disabled governor before, Franklin Delano Roosevelt, but he basically tried to hide his disability. So I would say that being the first disabled governor, who is able to display their disability, is a real milestone."

Fifty-four-year-old David Paterson didn't set out to make history, though it has become something of a habit.

At 31, he was elected to represent Harlem in the New York State Senate, becoming the youngest senator in Albany. But as lieutenant governor, he was essentially sitting on the sidelines.

"The lieutenant governor's job is to call the governor's mansion early in the morning and, if he answers, then that's the end of your job for the day," Paterson said.

But in a New York minute, everything can change.

By midday on Monday, March 10, the executive branch of the Empire State was embroiled in scandal.

"I came to work one day, and about an hour later, I knew that I would probably become governor," Paterson said. "It was shocking, I must say."

Shocking - on several levels. His boss, Eliot Spitzer, resigned after being linked to a prostitution ring. And soon after being sworn in, David Paterson realized life as governor would be a whole new ball game.

For example, after only one day on the job, Paterson disclosed that both he and his wife had extra-marital affairs of their own.

"The two of us thought that we might get divorced at one point, but we got back together," he said. "I think we did want to clear the air so that we could move on with our lives."

And so he could move on to problems like New York's $4 billion deficit - and partisan gridlock. But he'd also have one more very unique challenge.

Paterson's been blind practically since birth - the result of an infection of his optic nerve. He has no vision at all in his left eye, and only limited vision in his right.

"I'm blind, but only 29 percent of blind people are employed in our society," he said. "Of the deaf people in our society, only 10 percent have jobs. And yet, in both cases, our educational performance exceeds the national average in our society."

"Well, what it means is that the cure for cancer is probably stuck in the brain of little deaf girl that lives somewhere in our country," he said.

Growing up, his mother insisted that he attend public school and get no special treatment. She didn't even want him to learn Braille.

"She never wanted you to use a seeing-eye dog, or a cane," Couric said. "Why?"

"I think she wanted me to use my own ingenuity and creativity to try to be as adept at governing obstacles as possible," Paterson said. "And I think it created in me a belief that I could actually accomplish anything."

Even if it's in unconventional ways.

"Now I'm going into voice mail," he said, as the phone began speaking to him.

He calls it the "batphone," a voice mail system, which serves both his eyes and ears.

"Hello, governor, this is Ben," the phone spoke. "This is our draft of the talking points for the property tax family event in Westchester County tomorrow."

Since he can't read printed material, members of his staff leave messages each night to prepare him for the following day.

"The schedule for tomorrow, articles from magazines that some of my staffers thought were interesting," Paterson said. "And a friend of mine, ever since I became governor, she calls every morning at 6:00 a.m. and reads a Bible passage to me."

And Paterson's ability to memorize what he hears is almost superhuman.

"Well, memory is associative. I remember that I had to introduce someone and their initials were A.B.C. So, I just thought about another network, sorry," he laughed.

Whether he's sprinting to the finish of a 5-mile run or squinting to sign legislation, Paterson wants not just New Yorkers, but all Americans, to know his disability won't slow him down.

"There are two disabilities: One is the physical disability, the others is how the individual feels about it," Paterson said. "If you feel you can overcome your disability, your perception becomes reality."