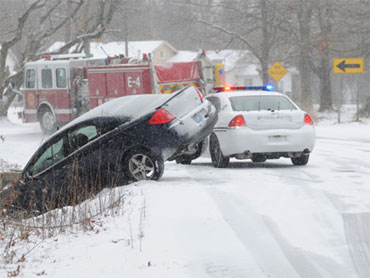 A powerful, gusty storm dumped mounds of snow across the upper Midwest on Sunday, closing major highways in several states, canceling more than 1,600 flights in Chicago and collapsing the roof of the Minnesota Vikings' stadium.

At least four weather-related deaths were reported as the storm system dropped nearly 2 feet of snow in parts of Minnesota and marched east. A blizzard warning was in effect Sunday for parts of eastern Iowa, southeastern Wisconsin, northwestern Illinois and northern Michigan, according to the National Weather Service. Surrounding areas, including Chicago, were under winter storm warnings. Much of Iowa was under a wind-chill advisory.

In Minneapolis, the heavy snow left the Metrodome decidedly unready for some football. Video inside the stadium aired by Fox Sports showed the inflatable Teflon roof sagging before it tore open, dumping massive amounts of snow across one end of the playing field.

No one was hurt but the Vikings' game against the New York Giants had to be moved to Detroit's Ford Field. The day of the game had already been pushed back from Sunday to Monday because the storm kept the Giants from reaching Minneapolis on time. Stadium officials were trying to repair the roof in time for the Vikings' next home game, Dec. 20 against Chicago.

The wintry weather, with blowing snow that severely limited visibility, wreaked havoc on air and road travel. In the Chicago area, wind gusts of up to 50 mph, temperatures in the teens and wind chills well below zero were expected, along with up to 8 inches of snow.

Officials at O'Hare set up about 200 cots and will provide amenity kits containing toothpaste and toothbrushes in case travelers get stranded at the airport, Pride said.

Major highways in several states were closed due to poor driving conditions and accidents.

In Indianapolis, police said a man fatally stabbed his wife, then died four blocks from his home Sunday morning when his vehicle hit a tree after he lost control on a slippery road. Police did not immediately release the names of the couple.

Illinois State Police closed a section of Interstate 80 in the north central part of the state after a multiple-car pileup west of Peru and part of Interstate 55 near Springfield after accidents and reports of zero visibility. No deaths were reported.

Seven vehicles crashed on Interstate 94 about 50 miles west of Milwaukee, prompting authorities to close the westbound lanes. A vehicle lost control on an ice-covered road and slammed into a tree in southeastern Wisconsin, killing 21-year-old Alejandria Abaunza of Chicago and injuring two other people inside.

Tod Pritchard of Wisconsin Emergency Management warned that Sunday afternoon would be especially difficult because temperatures were falling and at a certain point, road salt would no longer be effective. The storm had already dropped up to 18 inches of snow in parts of northern and central Wisconsin, he said, and light snow continued Sunday.

Interstate 90 from Albert Lea, Minn., to Exit 410 in South Dakota reopened Sunday afternoon after being closed Saturday because blowing snow reduced visibility. Minnesota state highways also reopened, although transportation officials warned that many were still snow-compacted, icy and, in numerous cases, down to a single lane.

In Iowa, Interstate 29 from the state line to Sioux Falls, S.D. remained closed, although other portions of it and Interstate 80 reopened.

AAA-Michigan said it has been a busy day for its roadside assistance crews, with 850 calls from midnight through 12:30 p.m. Sunday.

Six people were injured Saturday when a van carrying 13 people hit a guardrail and overturned in Mecosta County, near Stanwood, Mich., in the north-central Lower Peninsula. Authorities said Sunday that weather played a role in the death of Douglas Munneke, 55, of St. Cloud, Minn. He died of a heart attack after collapsing while he was snow-blowing his driveway Saturday.

In western Wisconsin, a 79-year-old man snow-blowing the end of his driveway was killed when a plow truck backed into him. The St. Croix County Sheriff's Department said Clifford Larson of Woodville died at the scene.

Snow also blanketed Tennessee, where up to 8 inches was expected by Monday evening. WSMV-TV in Nashville reported that the bad weather forced several communities to cancel Christmas parades planned for Sunday.

The weather was an unexpected burden for a Minnesota man who had pledged to camp out on the roof of a coffee shop to help his daughter's school raise money.

Hospital executive Robert Stevens donned four layers of long underwear, heavy boots and a down coat before embarking on his quest Friday night. He had vowed not to come down until he had raised $100,000, but he reconsidered about 3 p.m. Saturday after high winds shredded his tent canopy.

But Sunday morning, Stevens headed back up to brave the subzero wind-chills. He had only raised $54,000 and said if he didn't get to his goal the school would likely close.