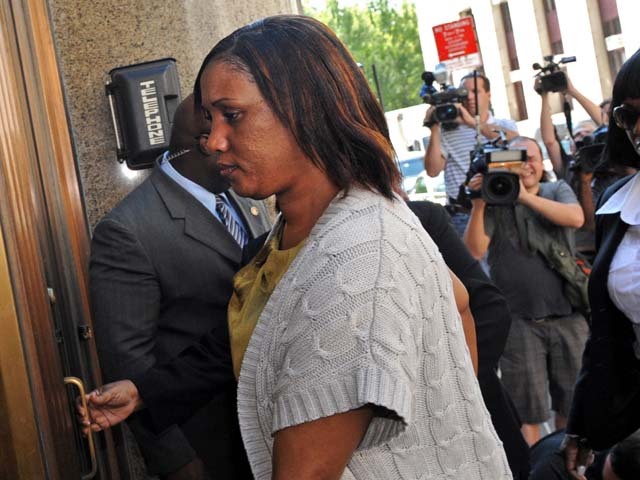 NEW YORK - The hotel maid who accused Dominique Strauss-Kahn of sex assault met with prosecutors Wednesday morning for the first time since the district attorney's office publicly announced it had doubts about her credibility.

Nafissatou Diallo arrived at the Manhattan district attorney's office with her attorney Kenneth Thompson and did not speak to reporters. The last meeting between Diallo and prosecutors, in June, ended with her in tears as prosecutors asked about inconsistencies they had uncovered in her past, her attorney has said.

The meeting came one day after the district attorney and Strauss-Kahn's attorneys announced they had agreed to postpone his next court date to Aug. 23, when prosecutors could announce whether or not they will go forward with the case.

Doubts about Diallo's background — which included lying on her asylum application that she had been gang raped and phone conversations she had with a man in an Arizona immigration prison after the encounter with Strauss-Kahn — prompted prosecutors to agree to have the 62-year-old former head of the International Monetary Fund freed from house arrest.

The relationship between prosecutors and Diallo deteriorated further after the public announcement, and her lawyer called for a special prosecutor.

Diallo, a 32-year-old widowed immigrant from Guinea with a 15-year-old daughter, broke her silence in recent days with interviews in Newsweek and on a series of ABC News programs. It's not clear whether that further widened the rift.

Neither the Manhattan District Attorney's office nor her attorney would comment.

Strauss-Kahn, a one-time French presidential contender, was arrested May 14 after Diallo said he forced her to perform oral sex, manhandled her and ripped her stockings in his luxury suite at the Sofitel Hotel near Manhattan's Times Square. He has been charged with attempted rape and other crimes.

He has denied the accusations. His attorneys are seeking to have the case dropped and say there is no evidence to suggest the encounter was forced.

In one example, prosecutors recently met with a lawyer for a French writer who has accused Strauss-Kahn of trying to rape her in 2003, an allegation Strauss-Kahn also denies. While French authorities explore her complaint, Manhattan prosecutors have asked about speaking with the writer herself, Tristane Banon, a person familiar with the case has said.

Thompson has reached out to another French woman who said she had a relationship with Strauss-Kahn and at times he was rough with her. The woman gave an interview to a Swiss publication where she said she would speak with prosecutors but she thought she would be aiding Strauss-Kahn more than Diallo.

In giving interviews to ABC and Newsweek, Diallo defied prosecutors' conventional wisdom about accusers speaking publicly before trial. It's generally seen as providing defense lawyers material to mine for contradictions and questions.

Before Sunday, Diallo's name had been reported by some French media outlets but not by major U.S. media, which generally protect the identities of people who say they've been sexually assaulted.

The Associated Press does not name people who say they are victims of sexual assault unless they come forward publicly, as Diallo has done.