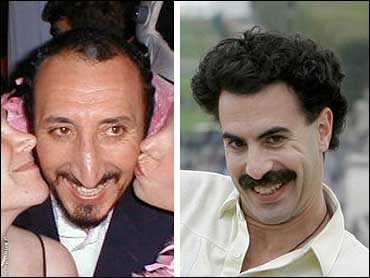 The president of Kazakhstan has not been amused and Russian censors banned the film, a move usually reserved for the hardest core pornography.

There is one more person who's not laughing.

Mahir Cagri, the first superstar of the Internet, made famous by his mangled syntax and desire to "invitate" women to visit him in his Turkish home.

At a ceremony in San Francisco he was named the Internet man of the year and given the key to cyberspace by one of America's biggest online companies.

His 15 minutes of fame over, Cagri never quite achieved that virtual stardom. But he's now convinced that he is the inspiration behind Borat. Dark hair, bad suits, and an interesting appreciation of the English language.

Cagri is threatening legal action and would like to make his own movie, CBS News correspondent Sheila MacVicar reports.

In an email sent to The ShowBuzz Thursday, Cagri said he is discussing the matter with lawyers. "The press all over the world said that Borat was imitating me and was stealing my character before I said so," he said. "There are a lot of proof of it and we will win the case."

Borat's creator has said the inspiration for the character was a doctor he met in southern Russia.

"I just think the that idea of someone saying, 'That Borat guy is very much like me, there would be no court in the world that would say, 'Hey, that guy's got a point!' " says Jono Coleman, a British radio and TV personality. "Since the dawn of time, comedians have been stealing from each other."

They do have one other goal in common: success with the ladies.

Cagri is still searching for the perfect woman. Borat, too, has his challenges.