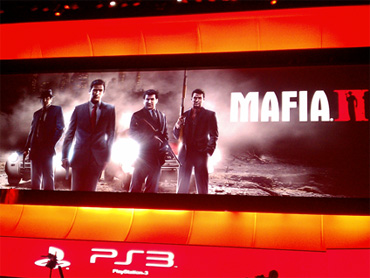 "Mafia II is what gamers want in a mob game - the marriage of a compelling story with edge-of-the-seat action and lifelike characters that immerse players in an epic entertainment experience," said Christoph Hartmann, president of 2K. "When you add in a setting that accurately reflects a period in history that has never been rendered so beautifully, it sets a new benchmark not just for the action-crime genre, but for any game set in the real world with a rich story to tell." This was a snippet taken from a press release which hit media inboxes this morning. Mafia II hit store shelves this morning and we can't wait to see what player reactions are going to be. Here's a preview we did several months ago and stay tuned for a full review of this title.

The allure of the mafia is one that has resonated in movies, TV and books. Developer 2K Czech is seeking to add the genre of video games to the list with their upcoming open-world saga Mafia II.

The sequel to the critically acclaimed "Mafia: The City of Lost Heaven" puts the player in the shoes of Vito Scaletta, who returns to America after a stint in World War II. Scaletta, the son of Sicilian immigrants, gets mixed up in organized crime thanks to his pal -- the tough-talking Joe Barbaro. This partnership takes the two up-and-coming criminals up the ladder of the mafia in Empire Bay -- a fictional recreation of New York.

2K Czech put a lot of painstaking detail into the demo that was shown at this year's Electronic Entertainment Expo 2010 (E3 Expo). The environment oozed the 1940s/50s feel the development team set out to capture. The suits Vito and his crew don have a mafioso style, from the black single-breasted coats to the tri-colored ties and fedora hats. The level of facial detail during cutscenes was breathtaking. Aspects of Vito's face, such as a scar on the left side of his face or even down to seeing facial pours was astonishing.

Mafia II doesn't skimp on the sound either. Taking a spin in one of the three cars available in the demo gave the player a brief taste of the '40s and '50s inspired soundtrack that automatically changes depending on the situation. If you're in the heat of a car chase, faster-paced music will blare through the speakers. Another high point was the voice acting, which captured the smart-ass nature of wise guys. The banter between Vito and Joe felt authentic and the heavy New York accents only added to the level of immersion.

Muscle cars from the era will be the player's main mode of transportation. The weighty feel to the cars is believable and the acceleration is also authentic. The cars will get damaged as you run into objects or take gunfire during car chases.

And if those car chases happen to involve the law, Mafia II's wanted system is not your standard fare. There is no wanted radius that the player has to escape to lose the cops. If you break their line of sight, you can switch cars and leave the cops wondering where you went. Also the level of crime has different consequences. Brandishing a firearm might make a cop run after you down a street, but killing someone will ignite an all-out search party.

The one aspect that most had me concerned coming into the demo was the cover system, but those fears were laid to rest quickly. The third-person action is intense and the cover mechanic thankfully is there to help -- not hinder the player. Moving between cover is quick and intuitive and never once was a hassle. The only oddity I found was that I needed to press R1 (right bumper) to reload my weapon. With L2 (Left Trigger) to aim and R2 (Right Trigger) to fire, it seemed to be a little unusual to have the reload in that place but that's a minor gripe.

The gunplay is spot on as well. Aiming down the sites was satisfying and enemies reacted to being shot in different parts of their body. But almost as much fun as hitting the intended target was missing on purpose because of the destructibility in the environment. Nearly everything in the world seems to be affected by gunfire thanks to the PhysX engine, which produces a staggering amount of detail in the destruction.

My time with the demo only reaffirmed my confidence in this title. The overall theme that seemed to prevail was the attention to the little things that separate a so-so game from a remarkable one. Is the life of a gangster all glitz and glamour? Probably not but 2K Czech is faithfully recreating the ups and downs so the player can decide for themselves. Mafia II hits stores Aug. 24 for PS3, Xbox 360 and PC.