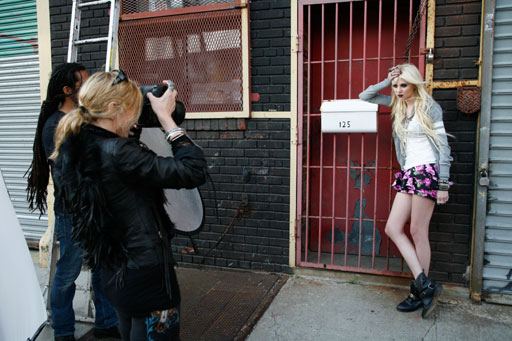 NEW YORK (CBS) Instead of being the one photographed, Madonna was the one taking the pictures at a photo shoot for a new junior's clothing line.

The line, called Material Girl, was co-designed by the singer and her daughter, 13-year-old Lourdes "Lola" Leon.

Pictures: Material Girl Behind the Scenes

"Gossip Girl" actress Taylor Momsen is the face of the collection, and was seen on the Brooklyn, N.Y. photo shoot posing in the clothes for photographer Tom Munro. Madonna also stepped behind the camera, and was seen talking to Momsen between shots. Leon was also seen at the shoot, sporting an edgy outfit and pink streaks in her hair.

"I'm psyched to be the face of Material Girl! For one, its Madonna, so you know it's gonna to be cool - and working with Madonna and Lola has been an unbelievable experience," she said in a news release. "They have such a great sense of style, each brought their personal touch."

She added, "A Material Girl can be anyone you want, it's all about making the style your own, that's what is cool about it."

Momsen, who is also the lead singer of the band The Pretty Reckless, is also scheduled to perform an acoustic set at the Macy's in New York's Herald Square on the line's release date.