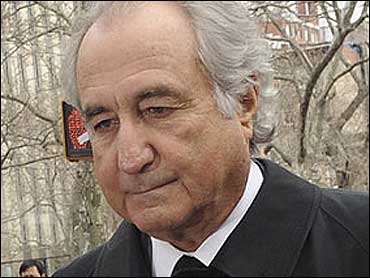 Bernie Madoff, mastermind of history's biggest Ponzi scheme, insists his dealings were legitimate until the early 1990s and that it was pressure from some of his biggest investors that led him astray.

The disgraced financier also claims he's been approached by some big business schools to - help with ethics courses!

The piece says, "In the flesh, Madoff spins a credible tale of how a renegade entrepreneur conquered Wall Street and was drawn into crime by personalities and forces he could not control. It sounds almost convincing."

Tett told Glor Madoff "didn't look pale" in the two hours she spent with him. "He looked like he'd been sort of, you know, pretty healthy. And he was fairly relaxed. He was chatting away. Frankly, he didn't look that different from most of the bankers you might meet down on Wall Street any day of the week."

"One of the reasons he called us in," Tett observed, "was because ... he was very keen to explain his side of the story. And he says, as so often with big frauds, that he started off small-scale, essentially trying to cover his tracks in a very small way. He thought he would be able to get himself back on track later on once the markets turned. However, the whole thing began to engulf him. And essentially, it snowballed. So he tells a story that he was basically legit during the 1970s and 1980s, and then it started to go wrong."

Madoff, she continued, has "clearly been through therapy. So he said over and over again, 'I take responsibility.'

"But he also wanted to indicate that essentially what put him on that path towards creating the Ponzi scheme was that some of his big four clients, some of the big families he'd originally worked with, wanted to get their money back; they knew they couldn't. And essentially they brought in new clients to replace the money that they needed to take out."

"What he says over and over again," Tett noted, "is that most of the people who invested with him should have had suspicions. They should have known. However, he also says that, if you were a small investor, there was no way you'd have that level of financial knowledge to properly understand it.

"One of the reasons he was very keen to talk to us was to stress that he doesn't think the trustee who is trying to recover some assets now should be taking back money from small-time investors. He thinks they should go after the banks."

As for his typical days, "He's working in the jailhouse shop, if you like, the commissary," Tett said, "and they call it the Money Management Center. And essentially he's managing that group. Probably pretty good use of his talents!

"He also spends quite a lot of me in his prison cell reading books. We asked him what he read. And he said things like James Noble and Danielle Steele, I guess, is a kind of escapism for him."

The Financial Times story also says, "Several business schools have approached him, he adds, and asked him to work on ethics courses. He likes that idea; Harvard and Northwestern are in his sights."

In the end, Tett told Glor, "The only person who's going to know (the entire truth about what Madoff did and why) is Bernie Madoff, and he's going to go to the grave, probably, with his secrets. But I think that we do have a very interesting insight into his character, into how he likes to tell a story.

"And you know, the thing that's really most important about this story is that he got away with this Ponzi scheme for many, many years -- partly because many of the things he was talking about in terms of his investment strategy sounded pretty credible on Wall Street."

"They still do, a little bit," Glor interjected.

"As they do," Tett replied. "That was the interesting thing. You meet him and he looks so normal. And so the big question is, if he turned out to be running a Ponzi scheme, how do we know whom to trust?"