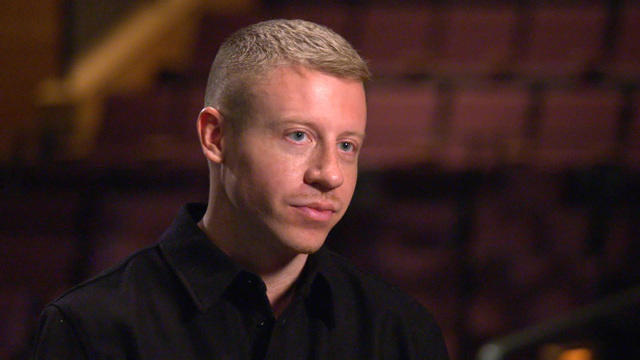 It was at Garfield High in Seattle's inner city where Ben Haggerty, the boy that became Macklemore, found his passion for music. Today, his talent is undisputed. The Grammy-winner's music videos have more than 3 billion views online and now he's using that success to help his hometown. Massive cuts to the arts and music programs in schools across the country have left many teens with few outlets for creative expression.

"Ever since I first got, you know, a little bit of money and a platform, it was like, 'Okay, how can we do something in Seattle, locally, that we didn't have when we were kids?'" Macklemore told CBS News correspondent Carter Evans. "If you're just in this strict curriculum every day and you're not exercising that creativity, you're going to want to escape. You're going to want to get out."

So Macklemore and his business partner, Ryan Lewis, teamed up with the Museum of Pop Culture and Arts Corps to give Seattle's disadvantaged teens a chance to pursue their hip hop dreams for free.

The Residency is an immersive extracurricular program, where the teens are even paid at least $600 so they can focus on learning skills from song structure to beat making.

Nineteen-year-old Talaya Logan said it's an experience she could never get in her high school.

"There's no band, there's no choir, at one point, like, it was bad…the school-to-prison pipeline is a real thing. Those students that are creative, those students that don't have the outlet, a lot of times they end up on the streets because they can't find what they need in classrooms," Logan said.

Using professional equipment, the students mix and record their own music

"I remember going home the first day and I crashed and I got up at like 3:00 a.m. and i was just making music until I went at 8:00 the next day," Logan said.

Olisa Enrico, who mentors the teens, said participants leave the Residency knowing it's okay to fail and learn how to be ready to be "bad and great all in one moment."

Macklemore struggled with substance abuse in his teens. These days, his passion for music fuels his commitment to stay clean and sober.

"Art comes from a place of struggle. It comes from opening up the heart and transmitting what's inside of you," he said. "I'm worried about the youth. I think that, if I would've had the access to pills, like these kids in 2018 do, that are at this very same school I think I would be dead."

Macklemore hopes the arts will save these teens the way it saved him.

Pastor fixes up hundreds of bikes for free