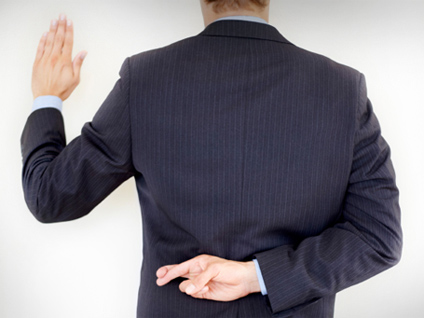 (CBS News) Here are three things most Americans take as an article of faith: The sky is blue. The pope is Catholic. And politicians are liars.

"There's a general awareness that candidates are giving self-serving accounts of what they stand for and what the other guy stands for," says historian David Greenberg of Rutgers University.

"Voters don't consider campaign promises to be real promises," adds historian H.W. Brands of the University of Texas at Austin. "They recognize that they're buying a used car from somebody."

For the past few weeks, Mitt Romney's presidential campaign has been aggressively pushinga deliberate misreading of President Obama's now-famous "you didn't build that" comment. The Obama campaign, meanwhile, has spent much of the campaign falsely casting Romneyas an advocate of letting the American auto industry die. They're just two of the claims that have kept groups like Factcheck.org and Politifact very busy during the 2012 campaign season.

These fact-checkers don't just deem claims true or false. Instead, they offer shades of gray - "mostly true," "three (out of four) Pinocchios" - to reflect the fact that politicians and their campaigns rarely offer up lies so obvious that they can't defend themselves against charges that they're liars.

"I think most presidential campaigns try not to tell direct lies," said Democratic strategist Jamal Simmons. "They may tell extremely shaded versions of the truth. Lying usually does get you in more trouble in the end - though obviously not always."

Simmons has a simple explanation for why politicians and their campaigns mislead voters: "You can get away with it. We know that." He says one of the most effective recent examples of an effective lie was the "Swift Boat" attacks on Sen. John Kerry in 2004, when the then-presidential candidate was accused in attack ads of lying about his Vietnam record.

The lesson of those attacks, Simmons said, is that politicians need to quickly and aggressively contest false claims before they take hold in the public consciousness. Kerry, he said, waited for weeks to respond and then offered only a "tepid" defense, in part because he did not want initially to elevate the claims by dignifying them.

"The dirty secret of political campaigns is there is no referee calling fouls and handing out penalties," he said. "Your campaign has to respond for the public to know you will fight." Mr. Obama recently went on the air with a response to the "you didn't build that" attacks, saying the ads are "taking my words about small business out of context - they're flat out wrong."

Politicians could potentially sue opponents over false attack ads, but libel claims are difficult to prove. The president could legitimately argue the "You Didn't Build That" attacks, for example, are misleading - but they aren't libelous. Plus, any libel victory a candidate does achieve is likely to be hollow, since it would most likely come after a campaign is over - and the other guy has potentially already won.

Despite a professed distaste for negative advertising, Brands said, the public rarely turns against a candidate for throwing mud at his opponent.

"I can't think of any election where the public said 'enough is enough,' where they were really turned off by negative campaigning," he said. "Many voters have become so cynical that they really don't expect candidates to speak the verifiable truth, and they accept these exaggerations, these mild falsifications, as just part of the game."

They don't just accept them, says psychology and behavioral economics professor Dan Ariely - they come close to demanding them from the politicians they support. His research found that Americans have a high tolerance for dishonesty when it comes from their own candidate, with no difference between Republicans and Democrats.

"I think it basically is about the ends justifying the means," he said.

"We have an agenda that we want to get things done," Ariely said. "And I think that everybody realizes that the system in Washington is such that if you're pure at heart, you're not going to get much."

"If you think the fight is fair, you might want your representative to be perfectly fair," he added. "But if it's not fair, and it's not right and has lots of corruption, then you might want the candidate that you choose to be less moral because then they would be able to get more."

In other words: The game is rigged, so you might as well have a cheater on your side.

"We understand that Washington is a corrupt system, and because of that we are willing to have corrupt individuals as part of the agenda because they are likely to fit better with the system and get more things done for us," said Ariely.

With the attack ads flying fast and furious, it may feel like lying in politics is worse than ever. But that's a tough case to make: In the 19th century, for example, party-affiliated newspapers would regularly give completely different accounts of identical events. Today, politicians don't just depend on partisan media outlets to spread distortions - they can be spread by ostensibly unaffiliated "super PACs" as well as supporters who push false claims, such as the notion that Mr. Obama is Muslim, online.

"You're never going to hear Mitt Romney say that, you're never going to hear anybody who's a high-profile Republican say it, but there are plenty of people who circulate it on the Internet," said Brands. "So you get the effect of the big lie, without the candidate needing to be the big liar." (It's worth noting that while most mainstream Republicans steered clear of "birther" claims, they were pushed by one high-profile Republican: Donald Trump.)

Outright falsehoods and out-of-context distortions aren't the only claims that could be considered lies. There are also campaign promises that can't or won't be kept - most famously, perhaps, President George H.W. Bush's "Read my lips, no new taxes." Other examples abound: Richard Nixon's "peace with honor" pledge to end the Vietnam War, Romney's (seemingly impossible) promise to cut taxes for all in a revenue-neutral fashion. It's not clear whether Mr. Obama believed his 2008 campaign claims that he would bring real change to Washington - but four years later, it's clear he didn't deliver.

Greenberg, for one, says the lies aren't always a bad thing. While "you didn't build that" is being used in a misleading way, he sees a valuable discussion behind it.

President Obama "was arguing that individual success in business owes a lot to the collectivity," said Greenberg. "Whether 'that' in his sentence refers to the businesses or the roads and bridges doesn't matter. The point of criticism - as Romney said - was the claim that there's a debt to the wider society and government. Obama and Romney were arguing economic philosophy, not parsing a sentence."

The same is true, he said, of Romney's comment that he likes "being able to fire people." Democrats have seized on that comment to attack the presumptive Republican nominee, despite the fact that Romney uttered the words as part of an argument that Americans should be able to choose from among health care providers.

"People on the right will say it's really unfair, it's a lie to say Mitt Romney likes firing people," Greenberg said. "That quote may have been taken out of context, but for somebody who thrives at Bain, which makes money by downsizing and firing people - is it really untrue?"