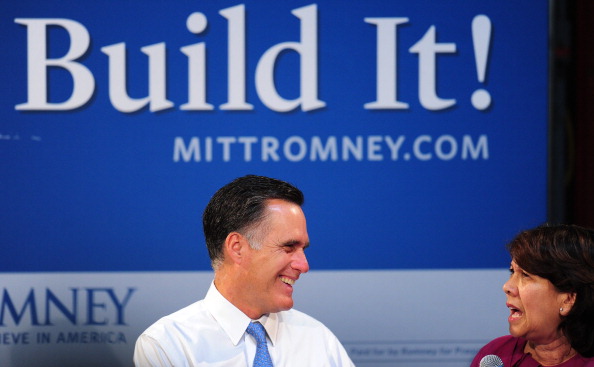 (CBS News) Mitt Romney and his Republican allies have spent the past week aggressively spotlighting a comment that President Obama made at a July 13 campaign stop. That's when Mr. Obama said, in part, "If you've got a business, you didn't build that. Somebody else made that happen."

The president has accusedRomney of using the comment to mislead the public, stating that the presumptive Republican presidential nominee is "knowing twisting my words around to suggest that I don't value small businesses."

Let's go to the transcript. Here's what the president said on July 13:

If you were successful, somebody along the line gave you some help. There was a great teacher somewhere in your life. Somebody helped to create this unbelievable American system that we have that allowed you to thrive. Somebody invested in roads and bridges. If you've got a business -- you didn't build that. Somebody else made that happen. The Internet didn't get invented on its own. Government research created the Internet so that all the companies could make money off the Internet."

Mr. Obama's comment prompted very different interpretations from Democrats and Republicans. But he appears to be saying that people who have been successful didn't get their on their own - that they had help from "a great teacher," the founding fathers, and a government willing to invest in roads and research that led to creation of the internet.

Romney argues that the comment "exposed what [President Obama] really thinks about free people and the American vision and government, what he really thinks about America itself." In Irwin, Pennsylvania on July 17, he said that while Americans appreciate roads and schoolteachers, it's important to remember the taxpayers pay for them.

"It's not like government just provides those to all of us and we say, 'Oh, thank you government for doing those things,'" Romney said. "No, in fact, we pay for them and we benefit from them and we appreciate the work that they do and the sacrifices that are done by people who work in government. But they did not build this business."

The Obama campaign shot back that while the president appreciates the "drive, hard work and creativity" of small business owners, it is critical they have the infrastructure and education they need to succeed.

"Those are investments we make not as individuals, but as Americans, and our nation benefits from them," said spokeswoman Lis Smith. "Apparently Mitt Romney disagrees."

The Romney campaign, sensing the "you didn't build that" comment taps into a deep strain of American individualism, clearly believed it had a winner on its hands: It spotlighted the comment in dozens of emails, sent out fundraising appeals based on it, and released a television ad showing an angry small business owner from New Hampshire responding in frustration.

It was a powerful video - but there was one big problem. As the New Hampshire Union Leader noted, Gilchrest's company "received $800,000 in tax-exempt revenue bonds" made possible by the federal government.

That wasn't the only revelation that muddled Romney's message. NBC News dug up evidence of Romney making comments to Olympians in 2002 that seem to echo Mr. Obama's comments earlier this month. Again, to the transcript:

"You Olympians, however, know you didn't get here solely on your own power. For most of you, loving parents, sisters or brothers, encouraged your hopes, coaches guided, communities built venues in order to organize competitions. All Olympians stand on the shoulders of those who lifted them."

The revelations haven't prompted Romney to back off. Yesterday, he argued not only that he didn't take the original comment out of context, but that the context shows just how bad it really is.

"This is an ideology which says, 'hey, we're all the same here, we ought to take from all and give to one another and that achievement, individual initiative and risk-taking and success are not to be rewarded as they have in the past'," he said on CNBC. "It's a very strange and in some respects foreign to the American experience type of philosophy. We have always been a nation that has celebrated success of various kinds. The kid that gets the honor roll, the individual worker that gets a promotion, the person that gets a better job. And in fact, the person that builds a business. And by the way, if you have a business and you started it, you did build it. And you deserve credit for that."

Mr. Obama, meanwhile, said Monday that Romney is making distortions that go "over the edge."

"In politics, we all tolerate a certain amount of spin," he said. "I understand these are the games that get played in political campaigns. Although when folks just, like, omit entire sentences of what you said, they start kind of splicing and dicing, you may have gone a little over the edge there."