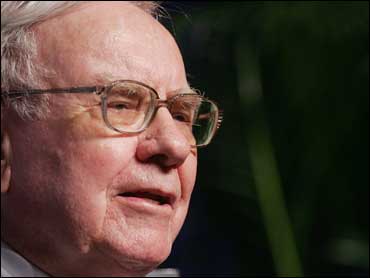 Two investors put in the winning bid of $650,100 in a charity auction to break bread with billionaire Warren Buffett.

Mohnish Pabrai, who will put up most of the money, said Saturday that he's going to be well-prepared by the time he meets the famed investor at a New York steakhouse.

"I'll probably download the menu and see what we want so we don't waste our time looking at the menu," Pabrai. "My wife's not a big fan of steakhouses — but I told her they serve fish as well."

Pabrai, who manages about $600 million for Pabrai Investment Funds in Irvine, Calif., teamed up with a friend to bid $30,000 more than the top bid from last year's auction. The 43-year-old investor said he bid unsuccessfully in the previous four auctions.

"We are elated," Pabrai said. "We wanted to make sure that this year we blew everyone out of the water."

The auction, which ended Friday night, benefits the Glide Foundation, which provides social services to the poor and homeless in San Francisco.

Pabrai, his wife and two daughters will join his bidding partner, Guy Spier of Aquamarine Capital Management LLC, and Spier's wife at the dinner with Buffett, the chairman and chief executive of Berkshire Hathaway, Inc. The group will dine at the Smith & Wollensky steakhouse in New York City.

The restaurant owners contributed $10,000 to Glide and will host the lunch. Pabrai said he does not expect the date to be set for a few months.

Pabrai said he attributes much of his own success to learning from Buffett and a few other investors.

"I'm shamelessly kind of plagiarizing their concepts and have gained tremendously financially as a result," he said. "Beyond the financial part, I think the best thing about Warren has nothing to do with investing. It has everything to do with leading a great life."

According to eBay records of the auction, which began last Sunday, there were 72 offers from pre-qualified bidders.

The most expensive charity item ever sold on eBay was a Harley Davidson motorcycle autographed by celebrities that Jay Leno offered in 2005 for tsunami relief. It brought $800,100, an eBay spokesman said.

This was the fifth year Buffett auctioned a lunch on eBay and donated the proceeds to the foundation. Buffett began auctioning the lunches for the charity off-line in 2000.

Last year, Buffett announced his plan to give away the bulk of his nearly $49 billion fortune over time. Most of Buffett's shares of Berkshire stock will go to five charitable foundations, with the largest share going to the Bill & Melinda Gates Foundation.

Pabrai said he's planning to ask Buffett about parenting and philanthropy as he sets up his own foundation to help extremely poor children in India get private tutoring to get into elite Indian technical colleges.

Pabrai said he plans to have his daughters, ages 11 and 10, sit next to Buffett during the lunch, and he's told them to prepare questions to ask him.

"They were extremely fired up watching the auction for the last 15 minutes — both of my daughters on different computers hitting refresh every five seconds," Pabrai said. "They've obviously heard me talk and read and all the different things about him and so they actually understand quite a bit about him."