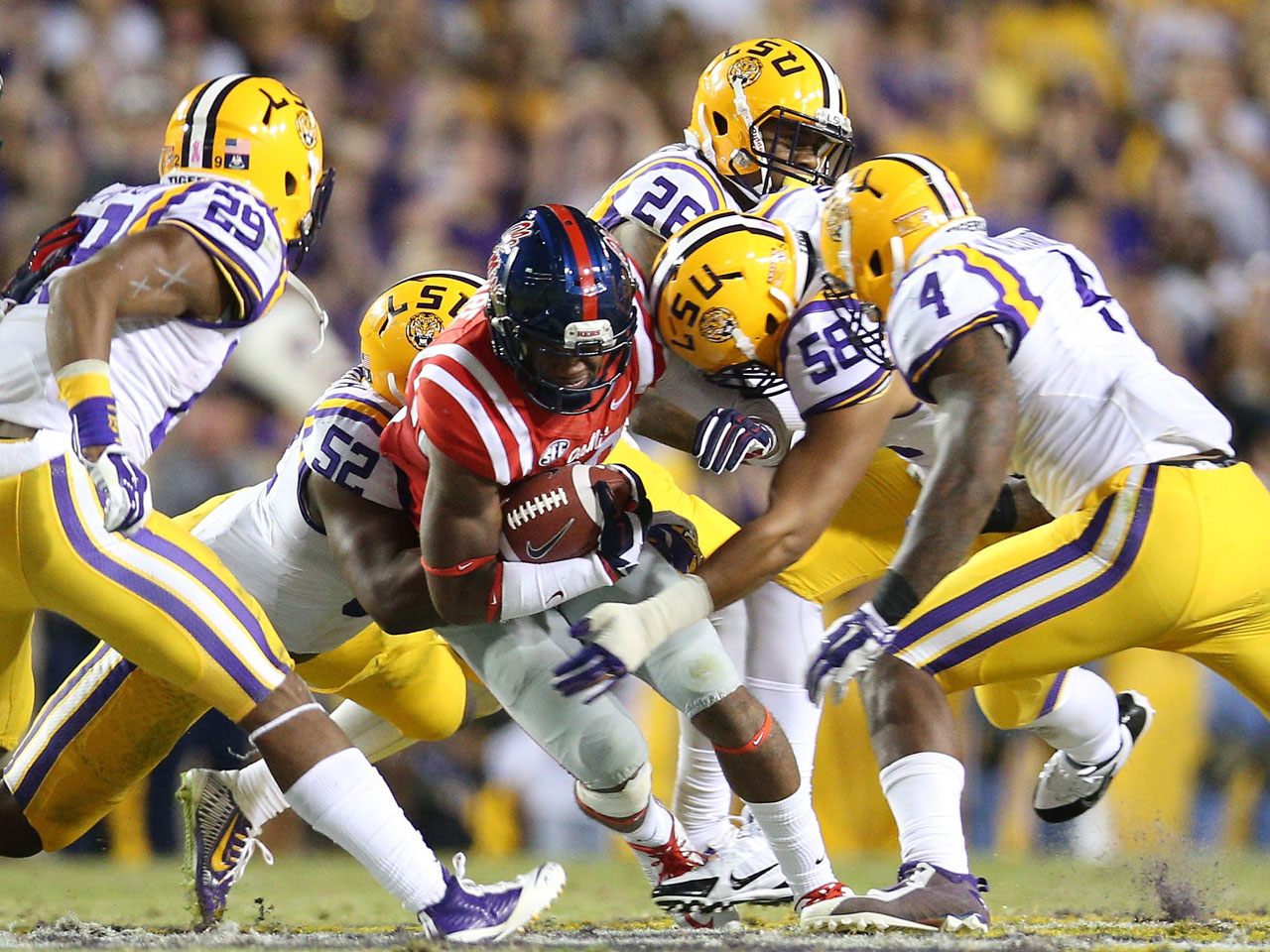 BATON ROUGE, La. - Bo Wallace was on the cusp of prolonging No. 3 Mississippi's bid for an unbeaten season until LSU safety Ronald Martin got in the way.

Wallace's pass was intercepted by Martin at the 1 with 2 seconds left, and the Rebels fell 10-7 to the 24th-ranked Tigers on Saturday night.

Ole Miss was lining up for a potential tying field goal from 42 yards, but was called for delay of game. So the Rebels decided to run a play instead and Wallace threw his first interception in a Southeastern Conference game this season. Soon after, fans were streaming onto the Tiger Stadium field.

Mississippi (7-1, 4-1) led most of the way, but mainly because LSU turned the ball over four times and missed a short field goal.

Playing less than 24 hours after coach Les Miles' 91-year-old mother died, the Tigers played with enough passion and confidence on both sides of the ball to overcome their mistakes and put a dent in the Rebels' national title hopes. The Tigers' defense, buoyed by the deafening roars of the Death Valley record-tying crowd of 102,321, largely stifled Wallace and the Rebels' offense that was averaging 35.4 points.

Wallace was 14 of 33 for 176 yards and one touchdown - a 15-yarder to Cody Core late in the first quarter. Wallace, who was sacked twice, still scrambled for 40 net yards, and led Ole Miss in rushing. LSU linebacker Kwon Alexander was credited with eight totals tackles - 2 1/2 for losses - and fellow linebacker Kendell Beckwith led the Tigers with 10 tackles.

Playing for the first time atop the rankings, the Bulldogs (7-0, 4-0 Southeastern Conference) showed no rust coming off an off week.

Kentucky (5-3, 2-3) got within a touchdown four times, and Heisman Trophy hopeful Prescott and Robinson answered with TDs on three occasions. Prescott had TD runs of 2 and 11 yards and threw an 8-yard scoring pass to Brandon Hill.

Christian Holmes returned a kickoff 61 yards for a touchdown 9 seconds later for the Bulldogs.

The game marked a return for Alabama offensive coordinator Lane Kiffin, who coached Tennessee in 2009 and angered Volunteers fans by leaving for Southern California after only one season. Kiffin's offense produced touchdowns on four of its first five series - including Cooper's 80-yard TD catch on Alabama's first play from scrimmage - as the Crimson Tide (7-1, 4-1 Southeastern Conference) raced to a 27-0 lead.

Tennessee (3-5, 0-4) got back into the game thanks to quarterback Joshua Dobbs, who provided a spark after entering the game on Tennessee's third possession. Dobbs helped the Vols cut the lead to 27-17 in the third quarter before Alabama's Derrick Henry stopped Tennessee's momentum with a 28-yard touchdown run.

Cooper's 224 yards receiving broke the school single-game record set by Julio Jones, who had 221 yards receiving in a 41-10 victory over Tennessee in 2010. By the end of the first quarter, Cooper already had five catches for 185 yards and two touchdowns.

AUBURN, Ala. - Nick Marshall ran for three touchdowns and passed for a score and Auburn survived a scare from South Carolina after Steve Spurrier made a succession of gambles that paid off.

The Tigers (6-1, 3-1 Southeastern Conference) finally stopped the onslaught of Spurrier, Dylan Thompson and fourth-down magic late in the game. Auburn burned off four-plus minutes from the clock after the first unsuccessful gamble before the Gamecocks (4-4, 2-4) made a stop at midfield for one more shot.

Thompson, who threw five touchdown passes and helped convert five straight fourth-down tries, took over at his own 15 with no timeouts and 1:08 left. Jonathan Jones made his second interception in the end zone of the fourth quarter on Thompson's last-play heave to preserve the Tigers' SEC and national title hopes.

The Gamecocks, 18-point underdogs, converted an onside kick and four fourth-down plays in their own territory. Spurrier finally busted on his last gamble. Thompson threw an incompletion on fourth and 14 from Auburn's 19 that gave the Tigers the ball back with 5:28 left.

The Gamecocks got another chance, and moved into Auburn territory with a completion and personal foul against Jonathon Mincy. Then Thompson threw one final pass into a crowd of players from both teams, and Jones came down with it. He also had a pick in the end zone early in the fourth when Thompson was drilled by Gabe Wright as he threw.

The Spartans (7-1, 4-0 Big Ten) have won six of their past seven games against the Wolverines, only the second time Michigan State has accomplished that in a series that dates to 1898.

The Wolverines (3-5, 1-3) are in danger of missing the postseason in Brady Hoke's fourth year at the helm, and this game did little to ease Michigan's descent. The Wolverines were held to zero yards rushing in the first half.

Michigan State has won 14 straight against Big Ten opponents. The Spartans have next weekend off before hosting Ohio State in a rematch of last year's conference championship game.

FORT WORTH, Texas - Trevone Boykin threw a school-record seven touchdown passes and TCU showcased a new fast-paced offense by scoring the most points in school history.

The Horned Frogs (6-1, 3-1 Big 12) beat their previous scoring high of 69 in the spread attack directed in part by co-offensive coordinator Sonny Cumbie, a former Texas Tech quarterback who spent the past four seasons as an assistant with the Red Raiders (3-5, 1-4).

Boykin had two scoring passes each to Josh Doctson and Deante Gray, who had a 92-yarder about 2 minutes before Ty Slanina caught a 57-yard touchdown pass that gave TCU 61 points midway through the third quarter.

Boykin was 22 of 39 for 433 yards while setting a career high in yards passing for the second week in a row, this time needing just three quarters before he was replaced by Matt Joeckel.

MANHATTAN, Kan. - Kansas State's rapidly improving defense led the first shutout of Texas in more than a decade to keep the Wildcats unbeaten in Big 12 play.

Matthew McCrane kicked three field goals, and DeMarcus Robinson and Charles Jones each ran for a touchdown to lead the Wildcats (6-1, 4-0). Jake Waters threw for 224 yards, and Tyler Lockett had eight catches for 103 yards to climb another notch in the school record book.

The Buckeyes (6-1, 3-0 Big Ten) built a 17-0 lead and were cruising when Penn State defensive tackle Anyhony Zettel intercepted Barrett's pass and returned it 40 yards for a touchdown in the third quarter.

In the first overtime, Penn State tailback Bill Belton took a direct snap from the Wildcat formation and scored on a 1-yard run. The Buckeyes countered when Barrett carried two straight times, the first for 17 yards and the second 5 yards for a touchdown.

Penn State was called for a personal foul on the touchdown, giving Ohio State the ball at the 12 to start the second overtime. With a third-and-2 from the 4, Barrett powered through the middle of Penn State's defense for a touchdown. Joey Bosa sacked Penn State's Hackenberg on a fourth-and-5 play to end the game.

Ezekiel Elliott ran for 109 yards on 26 carries for Ohio State.

SEATTLE - Taylor Kelly threw two touchdown passes after missing more than a month with a foot injury, the second a 7-yarder to Gary Chambers with 3 minutes left in Arizona State's victory over Washington.

Playing in strong swirling wind with waves of heavy rain blowing in sideways, the guys from the desert managed the difficult conditions for their ninth straight win over Washington. Arizona State (6-1, 4-1 Pac-12) remained in control of the race in the Pac-12 South and set up a huge matchup with Utah next week in Tempe.

Kelly threw a 16-yard touchdown pass to Jaelen Strong in the first half, but was at his best on Arizona State's final drive. On second-and-goal, Kelly got his pass off as he was being pulled down by Washington's Hau'oli Kikaha. Chambers made the adjustment on the throw and hauled in his only catch of the night for the go-ahead points.

Armand Perry returned an interception 61 yards for a touchdown with 52 seconds left when Washington's Troy Williams attempted a desperation throw on fourth-and-25. It was the second interception throw by Williams, making his first start after Cyler Miles suffered a concussion in the fourth quarter last week against Oregon.

Washington (5-3, 1-3) suffered its second straight loss to a ranked opponent. It's the first time a Chris Petersen-coached team has lost consecutive games since the end of the 2007 season when Boise State lost at Hawaii and then to East Carolina in the bowl game.

The freshman quarterback was 26 of 38 for 294 yards without an interception. Terris Jones-Grigsby added 107 yards rushing for Arizona (6-1, 3-1), which was coming off an off week after losing to Southern California.

Arizona scored 24 straight points in the first quarter, including two touchdowns by DaVonte Neal, to win for the fourth consecutive time in Martin Stadium. After Washington State went three-and-out on its first possession, Neal returned the punt 81 yards for a touchdown.

Abdullah surpassed 200 yards rushing for a nation-leading fourth time this season and fifth time in his career. He broke Roy Helu Jr.'s record of 321 all-purpose yards with his 23-yard touchdown run in the fourth quarter.

The Cornhuskers (7-1, 3-1) reached the halfway point of conference play tied with Minnesota for first in the West Division.

Big Ten newcomer Rutgers lost 56-17 at Ohio State a week ago and has been outscored 98-41 in its past two games.

The Scarlet Knights (5-3, 1-3) lost quarterback Gary Nova on the second-to-last play of the first half. Nova held his right knee after Maliek Collins brought him down as he got rid of the ball. Chris Laviano played the rest of the game.

Wilson put the Utes (6-1, 3-1 Pac-12) in position for the winning touchdown when he was flushed from the pocket and scrambled 19 yards, diving as he approached the goal line. The play was initially ruled a touchdown, but was overturned on review - giving Utah the ball a foot from the end zone.

Devontae Booker was stopped just short on the next play before Wilson's touchdown pass on a sprint out to the right side - a catch that also was reviewed before it was confirmed.

After Adoree' Jackson returned the kickoff to the USC 28, the Trojans' last-gasp effort was snuffed when Cody Kessler was sacked by Nate Orchard and Hunter Dimick on the final play.

The Tigers (6-2, 5-1 Atlantic Coast Conference) overcame a spotty offensive showing with another strong performance on defense, holding the Orange (3-5, 1-3) to a season-low 170 yards of offense.

Stoudt, starting a second straight game for injured quarterback Deshaun Watson, struggled much of the game with two interceptions and a fumble. But he led a 73-yard touchdown drive in the fourth quarter that ended with a 19-yard scoring pass to tight end Stanton Seckinger.

Smallwood stepped in for Rushel Shell, who sat out with a foot injury suffered during a win over Baylor last week.

Clint Trickett passed for 238 yards and two touchdowns and Mario Alford caught seven passes for a season-high 136 yards for the Mountaineers (6-2, 4-1 Big 12), who won their fourth straight and beat the Cowboys for the second straight year.

West Virginia won despite Kevin White's off day. The nation's leader in yards receiving per game was held to 27 yards on three catches.

Marshall (8-0, 4-0 Conference USA) overcame its first halftime deficit of the season to extend its home winning streak to 12 games.

Rakeem Cato threw the go-ahead score late in the third quarter to extend his Bowl Subdivision record of consecutive games with a TD toss to 40.

The teams traded field goals in the first overtime. The Bruins then stopped the Buffaloes (2-6, 0-5) in the second OT and they settled for a 34-yarder from Oliver.

Hundley faked a handoff and went into the end zone untouched for the winning score.

The junior quarterback rushed for 110 yards. Hundley also threw for 200 yards and a TD, giving him 67 in his career and moving him one away from tying Cade McNown for the school record.