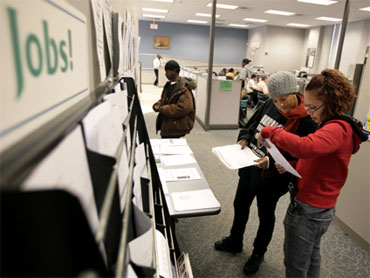 New unemployment claims have fallen for a fifth straight week, boosting expectations that the economy shed fewer jobs in November and remains on a path to recovery.

That optimism was tempered, though, by signs Thursday that the rebound will be slower and bumpier than those that followed previous recessions. Both retail sales and activity in the service sector unexpectedly shrank last month as consumers remained anxious about their jobs and hesitant to spend.

The surprise dip in the service sector was worrisome, because this area accounts for nearly 80 percent of the nation's economic activity. It includes such diverse industries as health care, retail, financial services and transportation.

Productivity gains in the third quarter also showed that employers are managing to squeeze more work out of fewer workers. That's a potentially ominous sign for the nearly 16 million unemployed Americans.

"We have got a recovery, but it is going to remain pretty slow and well below what you would normally see coming out of this deep of a recession," Gault said.

Most worrisome for the economy, perhaps, is that consumers - who drive 70 percent of the economy - continue to limit their spending.

The latest evidence was the miserable November the nation's big chain retail stores reported Thursday. After posting two monthly gains after more than a year of declines, the stores said sales dipped last month - a critical decline because it meant the holiday shopping season got off to a lackluster start.

The more positive news Thursday was the Labor Department's report that the number of newly laid-off workers filing for unemployment benefits fell for a fifth consecutive week. It dropped to a seasonally adjusted 457,000 last week. That's the lowest total since the week of Sept. 6, 2008.

The government is expected to report Friday that employers shed 130,000 jobs in November, fewer than the 190,000 jobs lost in October. But forecasters think the unemployment rate will remain at 10.2 percent, a 26-year high.

President Obama kicked off a White House jobs forum Thursday, saying he was "open to every demonstrably good idea" to reverse the rising tide of job losses. But with limited government resources, the private sector ultimately will have to lead.

"We have to be surgical, and we're going to have to be creative," Obama said.

Companies have been laying off fewer workers. But they have yet to ramp up hiring, and the jobless rate is expected to keep climbing, probably hitting 10.5 percent or higher by the middle of next year.

The government's productivity report said output per hour of work shot up at an annual rate of 8.1 percent in the July-September period. It was the sharpest quarterly increase in six years. For now, that means companies can get by without hiring more workers.

The question is how long they can do so. Nigel Gault, an economist at IHS Global Insight, said companies are reaching the limits of their ability to boost output with scaled-down work forces.

Gault expects employers to begin rehiring in coming months to meet customer demand. That would help sustain the recovery, because it would bolster incomes and encourage more consumers to spend. Many analysts say the economy should begin seeing net job growth sometime early next year.

For now, shoppers are being held back not only by job anxiety but by low wages. Over the 12 months that ended in October, wages and salaries - the most vital component of incomes - fell 2.9 percent, the Commerce Department said last week.

Partly because of that, Gault forecast that the overall economy, as measured by the gross domestic product, will limp along at subpar rates of about 2.5 percent through mid-2010. High unemployment, which has depressed wages and consumers' ability to spend, will continue to restrain the economy, he said.

The productivity report showed that unit labor costs, a measure of employers' wage and benefit costs, fell at a 2.5 percent rate in the third quarter. The decline followed a flat reading in the spring and a 5 percent plunge in the first quarter. Lower wage costs have allowed companies to bolster their profits even in a weak economy.

The Institute for Supply Management's service sector index dropped to 48.7 in November from 50.6 in October. It disappointed economists who had expected it to remain in positive territory. Any reading below 50 signals the service sector is contracting.

"There's no sugarcoating this report -it's grim," said Sal Guatieri, senior economist at BMO Capital Markets. "While it's unlikely that the economy will backslide into recession, at a minimum this suggests that the economy's underlying momentum is very weak."

"Our task is far from complete," he told the Senate Banking Committee. "Far too many Americans are without jobs, and unemployment could remain high for some time even if, as we anticipate, moderate economic growth continues."