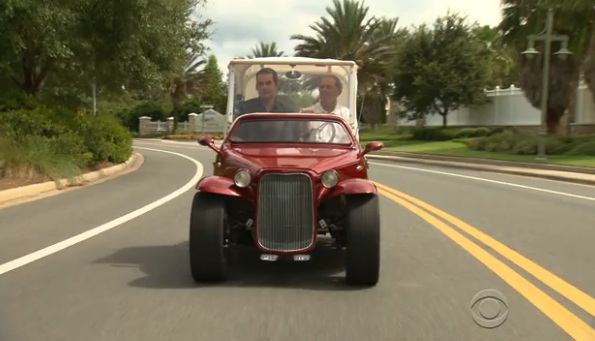 THE VILLAGES, Fla.-- A growing trend in transportation for seniors is low-speed electric vehicles.

While we would like to say these are not your grandfather's golf carts -- the fact is -- they are.

Gary Search owns two golf carts. One for him to go golfing in and the other to take his wife out to dinner and shopping in, he says.

After retiring to the Villages in Florida, Gary Search didn't have to search far for the right ride. They're all over.

The community caters to folks like Search -- 55 years old and older. It's crawling with low-speed electric vehicles. Here, there are more carts than cars.

For people who've never been here, it is quite the sight.

"With over 60,000 golf carts in the Villages, it's a major form of transportation," said Search

His tricked-out, candy-apple red California roadster looks more like a hot-rod, but it has safety features, too.

"It's legal because it has a license plate on it," Search explained.

Search agreed that authorities are strict about patrolling the streets for golf carts around the Village.

"They are, for safety reason," he said. "Because when you're driving a typical golf cart at those speeds, with the brake system, it's not safe for them. This cart has disc brakes on all four tires."

According to the Sumter County Sheriff's Office, over the past eight years, 16 people in the Villages riding in gold carts have been killed in road accidents. Almost all of them were not wearing seat belts and were ejected.

"We used to have two cars and two carts, now we only have the one car and two carts. And we have two street-legals," said Tim Carroll.

"You have to register just like a car and you have to get insurance," Carroll explained.

Car insurance and seat belts are required. The maximum speed limit is 25 miles per hour.

Does it feel any less safe?

"On occasion it does, I mean, you have to be more aware when you're on the roads because obviously we're a smaller vehicle and cars think that you're a golf cart, they think that you're slower so they try to beat you through intersections," said Carroll.

LSV's or low-speed vehicles, are on the fast track to being allowed on city streets in Los Angeles and New York, where politicians believe the future is slower. And at least in Florida, cooler, too.