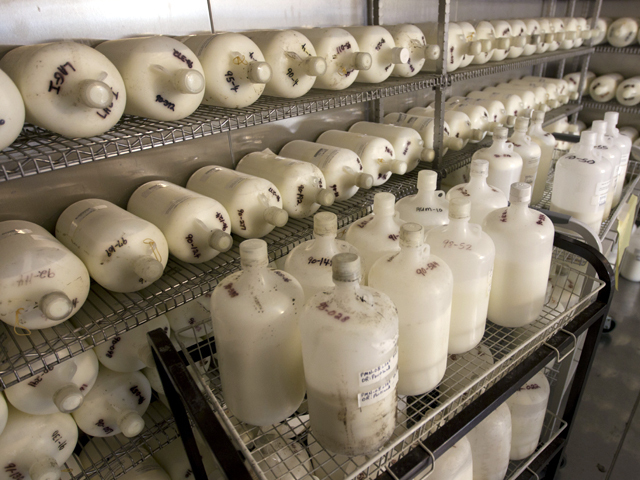 WASHINGTON - Very low levels of radiation turned up in a sample of milk from Washington state, the Environmental Protection Agency and the Food and Drug Administration said Wednesday, but federal officials assured consumers not to worry.

The FDA said such findings were to be expected in the coming days because of the nuclear crisis in Japan, and that the levels were expected to drop relatively quickly.

Japan's Fukushima Dai-ichi nuclear power complex began leaking radiation after it was damaged by a devastating earthquake and tsunami earlier this month.

Results from a March 25 milk sample taken from Spokane, Wash., showed levels of radioactive Iodine-131 that were still 5,000 times below levels of concern set by the FDA, including levels set for infants and children.

"Radiation is all around us in our daily lives, and these findings are a miniscule amount compared to what people experience every day," said Patricia Hansen, senior scientist at the FDA. "A person would be exposed to low levels of radiation on a round-trip cross-country flight, watching television, and even from construction materials."

EPA said it was increasing the level of nationwide monitoring of milk, precipitation and drinking water.

Spokane, a city of 208,000 residents, is located more than 300 miles east of the Pacific coast. Kim Papich, spokeswoman for the Spokane Regional Health District, said the agency was aware of the EPA report and preparing to issue a statement to residents.

"This is not a major health concern," Papich said.

The United States had already halted imports of dairy products and produce from the affected area of Japan. Other foods imported from Japan, including seafood, were still being sold to the public but screened first for radiation.

Japanese foods make up less than 4 percent of all U.S. imports. The FDA has said it expected no risk to the U.S. food supply from radiation.