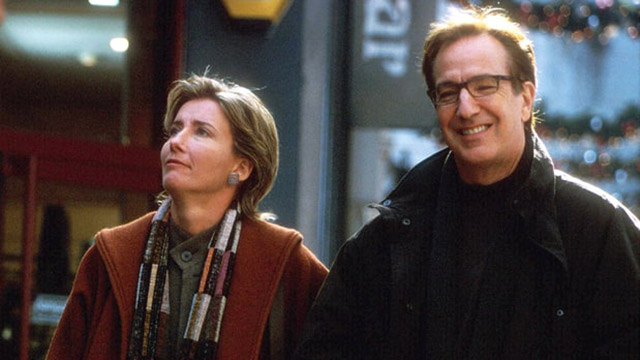 It's a question that has plagued "Love Actually" fans for 12 years -- did Emma Thompson and Alan Rickman's married characters stay together after he was caught having an affair with his secretary?

Emma Freud, a script editor for the film who's also married to the "Love Actually" writer and director Richard Curtis, recently live-tweeted during a midnight screening of the holiday classic. And lucky for fans, she revealed what so many viewers have wondered over the years.

First, Freud confirmed that Rickman's character Harry actually did have a full-on affair with his secretary (played by Heike Makatsch), although in the film, it's never shown.

"Did anyone ask if Harry ACTUALLY had an affair or was just tempted to?" a Twitter user asks, to which Freud replies, "DEFINITELY had an affair. I begged Richard just to make it a flirtation, but no. The whole way."

Later, she confirms that Thompson's character Karen chooses to stay with her husband. In their final scene in the film it's unclear -- Karen and Harry share a cold kiss on the cheek when they're reunited at the airport in front of their two children.

"They stay together but home isn't as happy as it once was," Freud wrote.

Last month, a "Love Actually" lesbian storyline that ended up getting cut from the final film was unearthed by Buzzfeed. The subplot revolved around the headmistress at Thompson's son's school (Anne Reid), who's caring for her terminally ill partner (Frances de la Tour). The scenes had to be cut after scenes between the headmistress and Thompson's son were scrapped altogether.

Watch the heartbreaking deleted scenes below.

Despite some pretty depressing storylines, "Love Actually" continues to be considered a holiday classic by many. More than a decade since the film was released, it's still being parodied, such as when Amy Adams lost it during a particularly hilarious "Saturday Night Live" sketch last year.