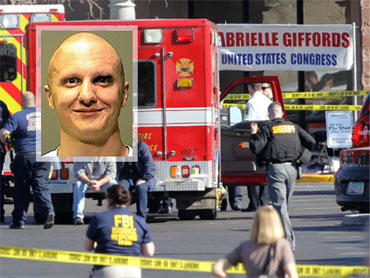 PHOENIX - A federal judge from southern California has been appointed to the case against the man accused of shooting Rep. Gabrielle Giffords, a federal judge and other federal employees.

The appointment of Judge Larry A. Burns came Wednesday after all federal judges in Arizona recused themselves.

The recusal order says the Arizona judges' impartiality could be questioned because U.S. District Judge John Roll was killed during the rampage. Roll was the chief federal judge for Arizona.

The appointment was made by Alex Kozinski, chief judge for the 9th U.S. Circuit Court of Appeals.

Jared Loughner has been charged with trying to assassinate the congresswoman and killing Roll, as well as fatally shooting a Giffords staffer and wounding two others.

Meanwhile, investigators are piecing together the timeline of Loughner's frenzied morning Saturday. The shooting rampage has shaken Americans and prompted a national debate about heated political rhetoric, gun control and access to mental health care. President Obama was attending a memorial in Arizona later Wednesday.

After two shopping trips to Walmart, Loughner ran a red light but was let off with a warning, the Arizona Game and Fish Department said. The officer took Loughner's driver's license and vehicle registration information but found no outstanding warrants and didn't search the car.

Earlier that morning, a mumbling Loughner ran into the desert near his home after his father asked him why he was removing a black bag from the trunk of a family car, sheriff's officials said. He resurfaced later Saturday at a grocery store where Giffords was holding an event. There, authorities say, he shot 20 people killing a federal judge and a 9-year-old girl among others.

Also on Wednesday, former Alaska Gov. Sarah Palin accused journalists and pundits of inciting hatred and violence in the wake of the shooting. Palin has been criticized for marking Giffords' and other districts with the cross hairs of a gun sight in promotional material for Republican candidates ahead of last year's congressional elections.

In a nearly eight-minute video on her Facebook page early Wednesday, Palin said vigorous debates are a cherished tradition. "But especially within hours of a tragedy unfolding, journalists and pundits should not manufacture a blood libel that serves only to incite the very hatred and violence they purport to condemn. That is reprehensible," she said.

In Arizona, investigators provided the new details about Loughner to The Associated Press and said they're still searching for the bag. They suspect it could contain clues into the 22-year-old man's motives.

"The bag is very important to us," said Capt. Chris Nanos, head of the Pima County Sheriff's Department's criminal investigations division. "What was in that bag and is there any relevance?"

Authorities previously said they found handwritten notes in Loughner's safe reading "I planned ahead," "My assassination" and the name "Giffords." Nanos and Rick Kastigar, the department's chief of investigations, and told the AP they also found notes with the words "Die, bitch", which they believe referenced Giffords, and "Die, cops."

All the writings were either in an envelope or on a form letter Giffords' office sent him in 2007 after he attended one of her political events, Nanos said.

Sheriff's deputies had been to the Loughner home at least once before the attack, spokesman said Jason Ogan said. He didn't know why or when the visit occurred, and said department lawyers were reviewing the paperwork and expected to release it Wednesday.

Loughner's parents, silent and holed up in their home since the shooting spree, issued a statement Tuesday, expressing remorse over the shooting.

"There are no words that can possibly express how we feel," Randy and Amy Loughner wrote in a statement handed to reporters waiting outside their house. "We wish that there were, so we could make you feel better. We don't understand why this happened.

"We care very deeply about the victims and their families. We are so very sorry for their loss."

The apparent target of the attack, Giffords, 40, was able to breathe on her own Tuesday at an intensive care unit here, another hopeful sign of her progress, doctors said. On Wednesday, her doctors said she was less sedated and more responsive and that her recovery was going as anticipated.

On Wednesday, grief-stricken members of the House of Representatives stood and delivered tributes one by one to Giffords. Newly installed House Speaker John Boehner, a Republican, set the tone, fighting back tears and speaking in a halting voice as he led off the series of remembrances. "Our hearts are broken but our spirit is not," Boehner said. "We are Americans, and we will make it through this difficult period."

Meanwhile, several hundred mourners filled a Tucson church for a public Mass to remember the slain and pray for the injured. As people filed in, nine young girls sang "Amazing Grace." The youngest victim of the attack, 9-year-old Christina Taylor Green, was a member of that choir.