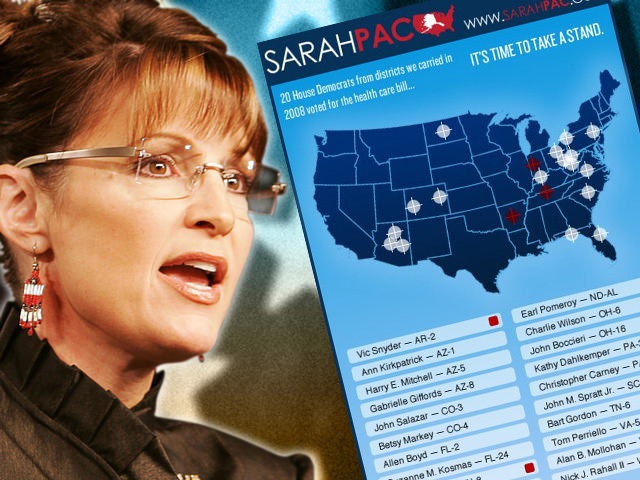 It's becoming increasingly clear that Jared Lee Loughner is mentally unstable. Sarah Palin's bullseye on Arizona Democratic Rep. Gabrielle Giffords did not direct Loughner to shoot Giffords point-blank in the head on January 8, 2011.

Did the vitriol in political discourse, crosshairs and phrases like "Don't retreat, reload" (by Sarah Palin) or "If they bring a knife to the fight, we bring a gun" (by President Obama) influence Loughner's state of mind?

Perhaps in an idiosyncratic way, according to Dr. Jeffrey Lieberman, chairman of psychiatry at Columbia University. "Political rhetoric provided some of the context for his thinking, the pretext for his actions, but the core reasons for his actions were his psychosis," Lieberman told National Journal.

Regardless of what motivated Loughner to pull the trigger, the tragedy in Tucson has put the tone of political discourse, and those who tend to inflame more than inform, in the spotlight.

Campaigning has often been rough and tumble and full of venom and half-truths since the founding of the country, but as Giffords told MSNBC on March 25, 2010, after her campaign headquarters in Tucson was vandalized, "In the years that some of my colleagues have served -- 20 to 30 years -- they've never seen it like this."

In reference to her district being targeted with the image of a crosshairs gun sight by Sarah Palin, Giffords said, "We're on Sarah Palin's targeted list, but the thing is, the way she has it depicted, it has the crosshairs of a gun sight over our district. When people do that they have to realize that there are consequences to that action." (watch at left)

But Palin doesn't seem to think that there are any negative consequences associated with her campaign words and images.

Like the rest of the country, she was shocked by what happened to Giffords and others killed or wounded in Loughner's rampage. Following the Saturday shooting rampage, she issued a statement, offering her "sincere condolences" to the families. At the same time, Palin's sighting of Giffords in the crosshairs stirred up the press and pundits regarding the overall tone of political discourse and the former Alaska governor's campaign rhetoric.

Palin surfaced again on Wednesday with an eight-minute video on her Facebook page, in which she said, "There is a bittersweet irony that the strength of the American spirit shines brightest in times of tragedy," and used the anti-Semitic term "blood libel " in an accusation aimed at journalists and pundits. (watch left left)

"If you don't like a person's vision for the country, you're free to debate that vision. If you don't like their ideas, you're free to propose better ideas. But, especially within hours of a tragedy unfolding, journalists and pundits should not manufacture a blood libel that serves only to incite the very hatred and violence they purport to condemn. That is reprehensible," Palin said.

Blood libel is the false accusation, perhaps originating in the 12th century, that Jews murder children to use their blood for religious rituals and holidays. Palin appears to be appropriating the term to indicate that she is a victim, as a result of some groups and individuals claiming that her political rhetoric contributed to the actions of the deranged, lone gunman.

But the real victims are Rep. Giffords and the others who were wounded or killed, not Palin, who appears to be tone deaf to Giffords statement that there are consequences to actions. The consequences of Palin's crosshairs may not be directly related to the shooting rampage in Tucson and assassination attempt, but they are related to the level of divisiveness in the country.

"Community leaders, not just political leaders, need to stand back when things get too fired up," Giffords said during her MSNBC appearance in March 2010.

The likely presidential aspirant doesn't seem to take any responsibility for ratcheting up the political dialog  or believe that there is any need to moderate the tone of political discourse in America.

In her video, Palin said, "And we will not be stopped from celebrating the greatness of our country and our foundational freedoms by those who mock its greatness by being intolerant of differing opinion and seeking to muzzle dissent with shrill cries of imagined insults."

In responding to the crosshairs image from the Palin camp, Giffords wasn't advocating for intolerance to differing opinions or muzzling dissent. She was calling for more civility in the democratic process.

"Our democracy is a light, a beacon really around the world. Change is affected change at the ballot box...and not because of these outbursts of violence in certain cases and the yelling," she told MSNBC.

It's time for Palin and others engaged in the democratic process to stand back and consider the full impact of their words and images.