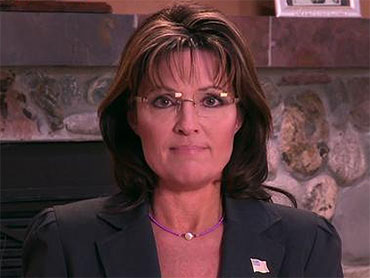 Saturday's shooting in Arizona had nothing to do with political rhetoric, and media figures who invoked a map featuring gun sights on congressional districts are guilty of "blood libel," Sarah Palin said in a video statement Wednesday.

The former vice presidential candidate has remained mostly silent since the attack that killed six people and critically wounded Democratic Rep. Gabrielle Giffords at a meet-and-greet event in a Tucson supermarket.

But Palin stressed Wednesday that the violence was the work of "a single evil man" and that crimes "begin and end" with the people that commit them. Palin dismissed the recent criticism focusing on whether incendiary political rhetoric - including her organization's swing district map featuring crosshair - might have contributed to a climate that promotes violence against political figures.

"I listened at first puzzled, then with concerned, and now with sadness to the irresponsible statements from people attempting to apportion blame for this terrible event," Palin said."If you don't like a person's vision for the country, you're free to debate that vision. If you don't like their ideas, you're free to propose better ideas. But especially within hours of a tragedy unfolding, journalists and pundits should not manufacture a blood libel that serves only to incite the very hatred and violence that they purport to condemn. That is reprehensible."

As the New York Times' Michael Shear explained Wednesday, "By using the term 'blood libel' to describe the criticism about political rhetoric after the shootings, Ms. Palin was inventing a new definition for an emotionally laden phrase. Blood libel is typically used to describe the false accusation that Jews murder Christian children to use their blood in religious rituals, in particular the baking of matzos for passover. The term has been used for centuries as the pretext for anti-Semitism and violent pogroms against Jews."

Palin is part of a chorus of voices on the political right casting itself as the victim of smears and an attempt to infringe free speech following the Tucson attack.

Right wing blogger and law professor Glenn "Instapundit" Reynolds argued in a Wall Street Journal op-ed Wednesday that "there's a climate of hate out there, all right, but it doesn't derive from the innocuous use of political cliches. And former Gov. Palin and the tea party movement are more the targets than the source."

Palin herself referred in the video to a House bill, proposed after the shooting by Democratic Rep. Robert Brady of Pennsylvania, that would "criminalize speech."

Palin said that attacks on free speech and the democratic political system remind us how much we cherish and need to protect them.

"It is in the hour when our values are challenged that we must remain resolved to protect those values. Recall how the events of 9/11 challenged our values and we had to fight the tendency to trade our freedoms for perceived security," she said. "We will not be stopped from celebrating the greatness of our country and our foundational freedoms by those who mock its greatness by being intolerant opinion and seeking to muzzle dissent with shrill cries of imagined insults."

It's unclear whether the timing of Palin's message has any special significance politically, but it came the same President Obama travels to Tucson to meet with victims' families and local leaders - and ahead of a planned national address from the University of Arizona Wednesday evening.