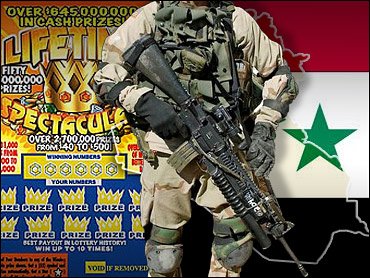 A national guardsman just back from a tour of duty in Iraq won $143,000 a year for life on a state lottery scratch ticket.

John Morrissey, 42, said the winnings will get him out of bankruptcy and help him to pay for his daughter's college.

"I always had faith that I'd hit it big," Morrissey told the Boston Herald newspaper.

A member of the 110th Maintenance Company, Morrissey returned from a 13-month tour of duty in Iraq five weeks ago. He served at the Tallil air base outside Nasariyah, where his job was to supply troops with vehicle parts. He had expected to spend six months there.

"Life was tough over there," Morrissey said. "I didn't come close to combat, but there were times that we had to be locked and loaded and ready to go."

The divorced father of two has a 17-year-old daughter, Ashley, and a 14-year-old son, Matthew. At one point in his life, he had to file for bankruptcy.

Morrissey said he plans to continue work as a shipper at Telco Systems, where he has worked for seven years, until he makes future plans.

"I want to do the right thing, which is not spend this money foolishly and go out and invest it, so later on I can enjoy my life," Morrissey said.

"I don't want to consider myself a lucky Irishman," he added. "I just want to say it's been a rough go of it through my life. And I guess I've been lucky enough to be lucky."