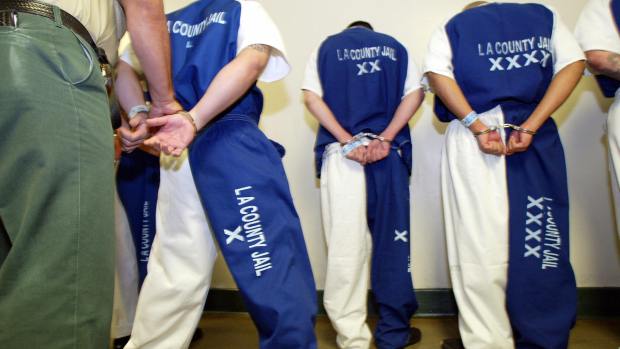 LOS ANGELES - Two Los Angeles County sheriff's deputies and a sergeant were found guilty Wednesday in the backroom beating of a jail visitor who fellow guards testified was handcuffed on the ground and covered in blood.

Sgt. Eric Gonzalez and Deputy Sussie Ayala were found guilty of conspiracy to violate constitutional rights, deprivation of rights and falsification of records in the 2011 beating of Gabriel Carrillo.

Deputy Fernando Luviano was found guilty of deprivation of rights and falsification of records.

Prosecutors and defense attorneys declined to comment after the verdicts.

Two other guards charged in Carrillo's beating previously pleaded guilty in the case and testified against their former co-workers.

Prosecutors told jurors the deputies unnecessarily beat Carrillo and tried to cover it up under their sergeant's direction.

Defense attorneys argued that Carrillo became combative as deputies tried to handcuff him and needed to use force to get him under control.

Noel Womack, one of the guards who previously pleaded guilty, described a culture of excessive force and cover-ups at the visitation center of the Men's Central Jail near downtown Los Angeles, according to his plea agreement with prosecutors.

Womack said Carrillo, who had been at the jail to visit his brother, was handcuffed, on the ground, and bleeding during the beating. Carrillo had been detained on suspicion of sneaking in a prohibited cellphone.

"The punches were retaliation and intended to inflict pain, and were made because defendant Womack thought he could get away with such action," according to a statement as part of Womack's plea agreement.

When writing his report justifying the use of force, Womack knew he would have to lie and say that Carrillo wasn't handcuffed, according to the statement.

The statement blames much of the beating on Gonzalez, saying he directed deputies to "snatch up" and arrest anyone who looked suspicious. The indictment in the case also accused Gonzalez of urging deputies to use force on visitors who disrespected them.

Gonzalez "encouraged and tolerated abuses of the law," including unreasonable searches and seizures, unlawful arrests, unjustified force and falsified reports, according to the indictment.

His attorney, Joseph Avrahamy, has said that when Gonzalez took charge of the visitation center at the jail in March 2010, "the place was a mess," with convicted felons and gang members being allowed to visit inmates against policy.

Gonzalez was cleaning things up by arresting prohibited visitors, Avrahamy said earlier this month. He said Womack and another deputy who reached a plea agreement in the case in February, Pantamitr Zunggeemoge, were only turning against Gonzalez and fellow deputies to save themselves.