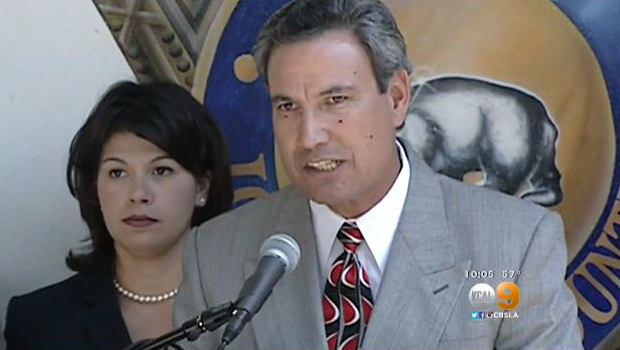 LOS ANGELES -- A Los Angeles County Sheriff's Department official was in hot water Wednesday after the Los Angeles Times printed a series of offensive emails that the official forwarded to people from his work computer, CBS Los Angeles reports.

Tom Angel, chief of staff for Sheriff Jim McDonnell, apologized for what he did, but the apology is ringing hollow for some activists.

The Times reports Angel forwarded the incendiary messages from his work account when he was the second-highest-ranking official in Burbank's police department in 2012.

"I took my biology exam last Friday ... I was asked to name two things commonly found in cells. Apparently 'Blacks' and 'Mexicans' were NOT the correct answers."

Another message makes fun of Muslims who are worried about profiling and belittles Islam's rituals.

"It's despicable because I can't believe that a person of such authority can use government services, using a government listserv, to circulate such trash against all minorities," Salam Al-Marayati, president of the Muslim Public Affairs Council, said.

Al-Marayti said he met with McDonnell and Angel, who was in disbelief that his emails became public.

"He was stunned, and I think at this point he's still stunned," Al-Marayti said.

Angel was hired to help clean up the sheriff's department after a scandal involving brutality at the jail brought down the former sheriff and top brass.

Al-Marayti said Angel's emails are a setback that will require community outreach.

The sheriff's department released a statement regarding Angel:

"Although his judgment in this situation is of concern to members of the sheriff's department, no one is more distressed about it than Chief Angel himself. His apologies for this uncharacteristic act have been profuse and sincere."

The sheriff is scheduled to meet with community leaders next week.