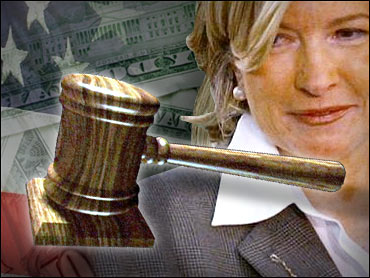 The jury in the Martha Stewart securities fraud case is not likely to begin deliberating the case until Wednesday.

CBS News Early Show National Correspondent Jon Frankel reports the judge will meet with all the attorneys Friday to discuss which counts the jury will be asked to consider and how they will be instructed on the law.

The jury will return to hear closing arguments on Monday and Tuesday.

U.S. District Judge Miriam Goldman Cedarbaum set the schedule after Stewart's lawyers presented a defense that took less than an hour Wednesday. Stewart did not testify.

Stewart's lawyers called as their lone witness a lawyer who took notes during a 2002 interview in which the government claims Stewart lied about the day she sold her stock in ImClone Systems.

The only witness on Stewart's behalf was Steven Pearl, a lawyer who took notes in her Feb. 4, 2002, interview with federal prosecutors and securities regulators.

The government claims Stewart lied repeatedly that day, including saying she did not know whether there was a record that stockbroker Peter Bacanovic had left her a message on Dec. 27, 2001, the day she sold ImClone stock.

But Pearl's scribbled notes show Stewart may have been responding instead to a question about what time Bacanovic called her that day.

Under cross-examination by prosecutors, Pearl admitted that his notes were incomplete and that there may have been a question about the message log he did not write down.

Referring to his notes and a memo he prepared after the interview, Pearl said: "Neither one is a verbatim transcript."

There was no court reporter or tape recorder in the interview, and the government relied on the notes of an FBI agent who was present to charge Stewart with lying.

An important figure in the Martha Stewart stock-fraud trial collapsed at a commuter train station and died, just two days after giving testimony that appeared to damage the defense.

Jeremiah Gutman, an 80-year-old lawyer who once represented the star witness for the prosecution, collapsed Wednesday on a Metro-North platform in Hastings-on-Hudson in suburban Westchester County.

He was found unconscious on a staircase and died later at a hospital. The cause was an apparent heart attack, associates of the lawyer said.

Gutman testified on Monday, called as a witness by Bacanovic's lawyers — but his testimony appeared to backfire on the defense as he backed up essential pieces of Faneuil's story.

The lawyers for Stewart and Bacanovic are gambling that jurors will decide the government simply has not met its burden of proof beyond a reasonable doubt.

The government claims Stewart sold her 3,928 ImClone shares because she was tipped that ImClone CEO Sam Waksal was frantically trying to sell his own. A negative report related to an ImClone cancer drug soon sent the stock tumbling.

Stewart and Bacanovic claim they had made a plan before Stewart sold to get rid of the shares if ImClone's stock price fell below $60.

Cedarbaum excused jurors for the week and told them to return for closing arguments Monday and Tuesday. They will receive instructions from the judge Wednesday, then begin their deliberations.

"Now is the time that it's particularly important for you to continue to keep an open mind, until you have heard the closing arguments and my instructions on the law," the judge said.

Cedarbaum still has not decided whether to throw out any of the charges in the case.

She has focused some of her attention in court on whether she should dismiss the securities fraud charge against Stewart — a count the judge herself has called "novel."

That count accuses Stewart of deceiving investors in her own company, Martha Stewart Living Omnimedia, by claiming in 2002 that she sold ImClone stock because of the $60 agreement.