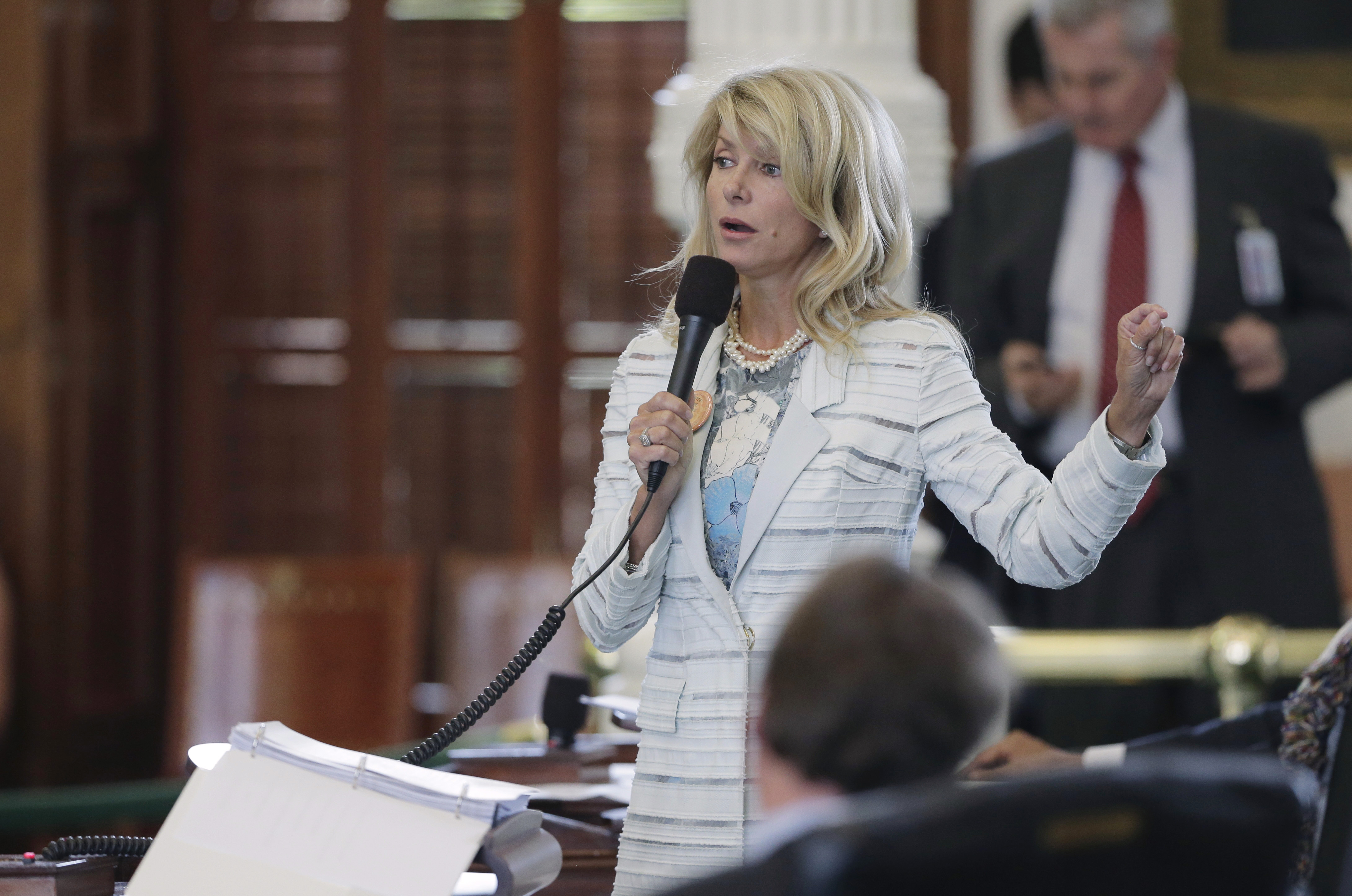 AUSTIN, Texas Texas' lieutenant governor late Tuesday suspended a senator's filibuster against wide-ranging abortion restrictions, but Democrats moved quickly to appeal the decision and set off a parliamentary fight over the rules.

Lt. Gov. David Dewhurst determined that Democratic Sen. Wendy Davis strayed off the topic when she talked about a sonogram bill passed in 2011 and how the new abortion restrictions only compounded the anti-abortion laws in Texas.

Democrats immediately appealed the decision and set off a heated debate. Austin Democratic Sen. Kirk Watson appeared to be positioning himself to launch a new filibuster on Dewhurst's decision.

Davis offered some insight to her plans Monday night on Twitter:

The filibuster began at 11:18 a.m. CDT Tuesday and continued until 10:03 p.m., less than two hours before the midnight deadline marking the end of the 30-day special session.

Rules stipulate she remain standing, not lean on her desk or take any breaks -- even for meals or to use the bathroom. But she also had to stay on topic, and Republicans pointed out a mistake and later protested again when another lawmaker helped her with a back brace.

Republican Sen. Donna Campbell called the third point of order because of her remarks on the sonogram law. Under the rules, lawmakers can vote to end a filibuster after three sustained points of order.

If signed into law, the measures would close almost every abortion clinic in Texas, a state 773 miles wide and 790 miles long with 26 million people. A woman living along the Mexico border or in West Texas would have to drive hundreds of miles to obtain an abortion if the law passes.

In her opening remarks, Davis said she was "rising on the floor today to humbly give voice to thousands of Texans" and called Republican efforts to pass the bill a "raw abuse of power."

Democrats chose Davis to lead the effort because of her background as a woman who had her first child as a teenager and went on to graduate from Harvard Law School.

In the hallway outside the Senate chamber, hundreds of women stood in line, waiting for people in the gallery to give up their seats. Women's rights supporters wore orange T-shirts to show their support for Davis, and Lt. Gov. David Dewhurst reminded those in the gallery that interrupting the proceedings could results in 48 hours in jail.

Davis tried to stay comfortable and sharp by shifting her weight from hip to hip and slowly walking around her desk while reading notes from a large binder on her desk. When a male protester stood in the Senate gallery and shouted, "Abortion is genocide," Davis continued talking uninterrupted as the man was removed by security.

If the filibuster succeeds, it could also take down other measures. A proposal to fund major transportation projects as well as a bill to have Texas more closely conform with a recent U.S. Supreme Court decision banning mandatory sentences of life in prison without parole for offenders younger than 18 might not get votes. Current state law only allows a life sentence without parole for 17-year-olds convicted of capital murder.

Twice in the first six hours, anti-abortion lawmakers questioned Davis about the bill, presenting their arguments that it would protect women or that abortions were wrong. Davis answered their questions but did not give up control of the floor.

"This is really about women's health," said Sen. Bob Deuell, who introduced a requirement that all abortions take place in surgical centers. "Sometimes bad things can happen."

Davis questioned then why vasectomies and colonoscopies aren't also required to take place in such clinics. "Because I've been unable to have a simple question answered to help me understand how this would lead to better care for women, I must question the underlying motive for doing so."

Davis read testimony from women and doctors who would be impacted by the changes, but who were denied the opportunity to speak in a Republican-controlled committee. During one heart-wrenching story describing a woman's difficult pregnancy, Davis choked up several times and wiped tears.

The bill would ban abortion after 20 weeks of pregnancy and force many clinics that perform the procedure to upgrade their facilities and be classified as ambulatory surgical centers. Also, doctors would be required to have admitting privileges at a hospital within 30 miles -- a tall order in rural communities.

"If this passes, abortion would be virtually banned in the state of Texas, and many women could be forced to resort to dangerous and unsafe measures," said Cecile Richards, president of Planned Parenthood Action Fund and daughter of the late former Texas governor Ann Richards.

CBS News correspondent Manuel Bojorquez reports many clinics would be forced to shut down because they wouldn't be able to afford the changes required by the law. Amy Hagstrom Miller, CEO of Whole Woman's Health, said it would cost up to $2 million for each of her clinics to be upgraded to hospital-style operating rooms.

"I'd have to knock down the wall between this room and another room, I'd have to add airflow systems, I'd have to get oxygen piped in through walls instead of tank in here," she explained in one of her centers.

Sen. Dan Patrick, R-Houston, said the Democrats never should have been allowed to put Republicans "in a box" and complained that many in the Senate GOP were "flying by the seat of their pants."

But the bill's bogging down began with Republican Gov. Rick Perry, who summoned lawmakers back to work immediately after the regular legislative session ended May 27 but didn't add abortion to the special session to-do list until late in the process. The Legislature can only take up issues at the governor's direction.

Then, House Democrats succeeded in stalling nearly all night Sunday, keeping the bill from reaching the Senate until 11 a.m. Monday.

Debate in that chamber included lawmakers waving coat-hangers on the floor and claiming the new rules are so draconian that women are going to be forced to head to Mexico to have abortions.

At one point, the bill's sponsor, Republican Rep. Jodie Laubenberg of Spring, errantly suggested that emergency room rape kits could be used to terminate pregnancies.