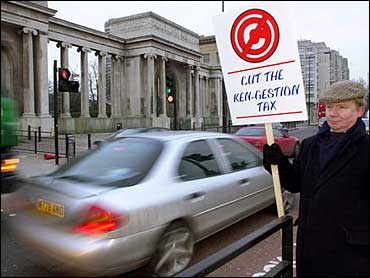 Drivers heading into central London began paying a hotly debated $8 toll on Monday, as a small group of people rallied to protest the ambitious attempt to ease traffic gridlock.

London Mayor Ken Livingstone has said the toll could end his political career, but it went into effect at 7 a.m. as promised. All car drivers entering the crowded 8-square-mile area of central London, which includes the bustling financial district, must pay.

Livingstone insists the drastic action is necessary to reduce congestion in the British capital, where traffic moves at an average of under 10 mph during the day and motorists spend half their driving time stuck in jams.

London's layout lends itself to traffic nightmares: Much of the dense central city consists of narrow streets and tight corners, split by a winding river.

"There will be some problems, but by Easter I'm confident that … this will have worked," Livingstone told British Broadcasting Corp. radio shortly after the charge came into effect.

But opponents insist it will put further pressure on London's overcrowded buses and creaking subway when thousands of motorists abandon their cars for public transport. They also predicted gridlock on roads surrounding the areas where the tolls would be levied.

But the BBC reported that the main arteries ringing central London were mostly empty. Monday was the first day of a one-week school vacation, which usually reduces traffic by about 20 percent, the Automobile Association said. London Underground said business was normal on the subway, also known as "the Tube."

"The traffic looks OK at the moment," Livingstone's managing director of street management, Derek Turner, told television station Sky News. "The test will be later on."

Sky News showed a small demonstration near one of the entry points, which are marked with a white letter C in a red circle painted on signs and the road. About a dozen protesters waved banners and posters, but cars streamed across the boundary at a steady pace.

Steve Jordan, from Farnborough south of London, said he would do everything he could to avoid entering the zone. "It's another tax on people and we get ripped off enough," he said.

The BBC reported heavier than usual traffic heading into central London before 7 a.m., as some commuters appeared to try avoiding payment by reaching work early.

City Hall says the toll will cut the volume of traffic in the zone by 20 percent, ease congestion and raise $208 million a year for public transport investment.

Even so, Livingstone admits that it could be his downfall. "But what's the point of being in politics if you don't do something with your position?" he told BBC. Livingstone is known as "Red Ken," for his socialist beliefs.

Critics of the toll say its timing could hardly be worse. The overstretched London Underground is under added strain after a Jan. 25 crash on the busy Central Line, which remains closed until further notice. During rush hour, Kings Cross and Euston stations are regularly closed because of overcrowding on platforms.

For those traveling in to the city from further out, the British rail system offers a poor alternative. It was privatized, then returned to public control, but chronic delays continued.

To enter the zone, drivers can buy daily, weekly, monthly or yearly passes by credit card, or pay by cash or check at post offices and some shops, and must give their license plate number.

A network of 800 cameras linked to a bank of computers polices the zone, photographing license plates between 7 a.m. and 6:30 p.m. on weekdays.

Computers automatically check plate numbers against a national database, and those yet to pay will be given until midnight before being fined $65. The fee will rise to $130 after two weeks and $200 after 28 days.