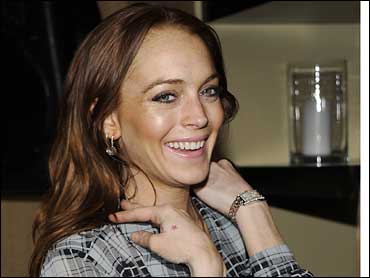 There's always been lots of buzz about Lindsay Lohan in Hollywood, but that buzz has turned to concern in many quarters following her recent appearance on "The Ellen Degeneres Show."

Many people are saying the actress is too thin, and that she may be in a downward spiral since her breakup with gal-pal Samantha Ronson.

Lohan claims she's focused on getting her career back on track.

On The Early Show Saturday Edition, In Touch Weekly Senior Editor Amy Palmer reminded viewers that, "This is something we've seen with Lindsay before. Every time she's in a situation where she's under stress, she loses weight. I'm not saying this isn't something to be concerned about, but this is a pattern she's established. She is way too thin, and I think her friends and family definitely have a right to be concerned. But again, we've seen this before with her."

Asked about Lohan's recent partying, Palmer replied, "There have been reports that she is partying. But let's remember: Lindsay is 22 years old. Twenty-somethings party. They go out to clubs with friends and drink. The difference is, Lindsay's doing it under a microscope, and she has been in rehab."

What about that mock video dating service ad she recently made?

"That was a great look into Lindsay's psyche," Palmer observed, "because she's saying, 'I get it. I've been through this before.' It's kind of like a tongue-in-cheek thing. So, she gets it, she's in on the joke, because she's on every tabloid cover, and she's used to being in the spotlight, but you have to say this is a cause for concern, because these factors can lead her in the wrong direction."

Another celeb causing tongues to wag over her weight is Australian model Stephanie Naumoska, who was runner-up in the latest Miss Universe pageant. Co-anchor Erica Hill described Naumoska as "frankly, frighteningly thin," adding, "It's also frightening to think of the messages the judges are sending by saying, 'You're No. 2 to Miss Universe, you look great." '

"This is definitely a cause for concern," Palmer agreed. "That contestant was a runner-up. She's five-foot-eleven and 108 pounds. That is not healthy.

"What is going on in our society is there is a yearning to show healthy women in the media, and that's happening. If you look at the stars from the new '90210,' when they emerged on the scene, they were very skinny, but, lately pictures emerge where they're looking healthy. That's a great role model for young girls.
But, when you look at Lindsay and the contestant from Miss Universe, it absolutely is a cause for concern."
Hopefully it can be a jumping off point for a conversation about being healthy.