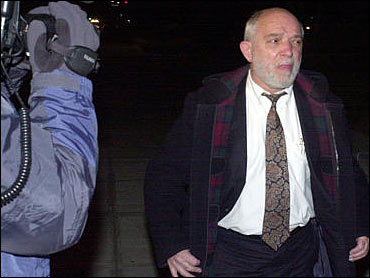 Figuring the damage would cause the company's stock price to fall, the former worker bought what are called put options for UBS stock before activating the program, prosecutors said. Put options give the purchaser the right to sell shares for a fixed per-share price, so the lower a stock falls the more valuable the option becomes.

The plan failed, however, when the company's stock price did not decline after the March 4 attack.

UBS PaineWebber promptly reported the attack and cooperated with the investigation, prosecutors said.

Roger Duronio, who quit the company 10 days before the incident, was charged with one count of securities fraud and one count of fraud in connection with computers, in a federal indictment returned Tuesday

Duronio, 60, worked in the company's Weehawken offices, and had repeatedly complained about his salary and bonuses, the indictment said.

Duronio's tampering, which affected about 1,000 of the 1,500 networked computers in branch offices around the nation, acted as a virus, deleting and damaging files, the indictment said.

Before it was activated, Duronio bought 318 put options for UBS stock at a cost of $21,762. All were to expire March 15, the indictment said.

Duronio was not arrested. He made a court appearance and was released on $1 million bond.

On The Horizon: The cancer breath test