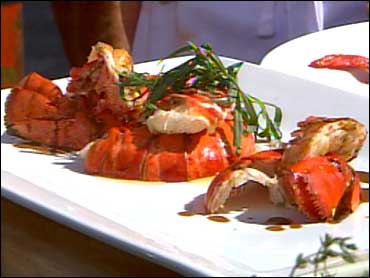 Looking to prepare lobster for a great meal on a hot summer night?

The Early Show's resident chef, Bobby Flay, showed on Thursday how easy it is to grill lobster right in your backyard. He also had two other dishes that are simple to prepare, without a grill.

Lobsters are usually shipped and sold with their claws banded, to prevent them from injuring each other or the purchaser. Lobsters can't open and close the claws when they are banded, which causes the claws to begin to atrophy inside the shell. Very fresh lobsters will not show this, and the claws will be full.

Many restaurants that serve lobster keep a tank of the live creatures, often allowing patrons to pick their own.

The shell of the lobster makes eating it a slow process for the unskilled or timid, who may require a number of implements including nutcrackers, a small fork, and plastic bib. It's possible to shell a lobster by hand if you're careful to avoid the sharp points.

The tail can be snapped open by first squeezing its sides inward, then grabbing the edges of the shell, placing the thumbs on the dorsal side and pulling the sides apart. The claws usually open by hyper-extending the lobster's "thumb," then pulling it out. Sometimes, the claws can then be cracked by simply squeezing them. Otherwise, an ordinary fork is usually sufficient to snap open the side of the claw.

The majority of the meat is in the tail and the two front claws, but smaller quantities can be found in the legs and torso. The larger the lobster, the greater the proportion of meat in the small legs and body.

Lobster can be consumed simply, boiled or steamed, or used in a wide array of dishes and salads. It can be served as lobster soup or bisque.

In North America before the 20th century, local lobster was not a popular food. In the Maritimes, eating lobster was considered a mark of poverty. In some parts of the Maritime provinces of Canada, lobster was used as a fertilizer for farmers' fields, and a great deal of lobster was fed to slaves or the lower members of society. Outside the rural outposts, lobster was sold canned, losing much of its flavor, which can be disguised if the lobster is dipped in drawn butter.

The reputation of lobster changed with the development of the modern transportation industry, which enabled the shipment of live lobsters from ports to large, urban centers. Fresh lobster quickly became a luxury food and tourist attraction for the Maritimes and Maine, and an export to Europe and Japan, where it is especially expensive.

Fill a large pot halfway with cold water and add 1 tablespoon of salt and bring to a boil. Add the lobster tails and cook for 6-10 minutes.

Place butter and 2 tablespoons of the tarragon in a small saucepan and melt over low heat until melted. Remove the top layer of foam that has risen to the top with a spoon and discard. Strain the butter through a strainer lined with cheesecloth into a bowl and season with salt and stir in the remaining tablespoon of tarragon.

Heat olive oil on medium saucepan over medium high heat. Add the onions and garlic and cook until soft. Add the chile flakes and cook for 30 seconds. Add the tomatoes and cook until thickened. Season with salt and pepper and stir in the basil and parsley. Place cooked pasta in a bowl and top with the sauce and lobster.

Combine orange juice, tamarind paste, mustard, vinegar, mint and salt and pepper in a blender and blend until smooth. With the motor running, slowly add the oil and blend until emulsified.

Heat grill to high. Brush flesh side of lobster tail with oil and season with salt and pepper. Place tails, flesh-side down on the grill and grill until slightly charred; flip over and continue grilling for 2-3 minutes. Remove from grill and immediately drizzle with tamarind-mint vinaigrette.