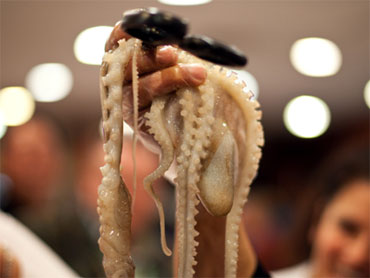 Ben Raisher watches as the writhing Octopus on his plate has its tentacles clipped with giant shears, then squirms in amber sesame oil like a pile of bisected earthworms.

With a deft pinch of his chopsticks, the wriggling, still-alive limb is in his mouth and down his throat.

Raisher, 28, smiles. It is what brought him to his local food adventure club, one of a handful of groups from New York to San Francisco dedicated to dining on exotic and bizarre foods.

The iron-stomached champions of New York City are the Gastronauts, who meet monthly to feast on foods many would not consider, such as pig hearts and intestine in vinegar, goat kidneys or sauteed lamb's brains.

"Nothing's off the table," said co-founder Curtiss Calleo, who grew up in Austria and Italy and wants to bring Old World curiosity to New York palates. "Any restaurant worth its salt has sweetbreads or tongue or pork bellies. There's a food renaissance going on."

Offal is old hat for groups like the Boston Gastronauts and the Organ Meet Society of New York City. There are groups devoted to eating only insects and some that venture into extreme territory, like the San Francisco Food Adventure Club that recently organized a human placenta tasting (the dinner had to be canceled due to potential formaldehyde exposure).

Most of the adventures are in good fun, but some have pushed boundaries. Last week, federal prosecutors filed charges against a restaurant and sushi chef accused of serving endangered whale meat in Santa Monica, California.

The Gastronauts have more than 300 people on their mailing list, and nearly 50 attended the March meeting at a Korean restaurant in the New York City borough of Queens, where gastro-warriors tried live octopus along with lobster sashimi, freshly vivisected, then displayed on the plate on a bed of lettuce in front of its meaty core. The head appears to watch the body get eaten as its antennae and claws twitch.

Delicious? Perhaps not. But that's hardly the point.

"Boring food bores the crap out of me," Raisher, 28, said between bites.

For Jenna Volcheff, a pastry chef who has been attending Gastronauts meetings since November, it is a chance to taste food from different cultures "instead of going to a different country, which I can't do on a monthly basis, or often a yearly basis."

That wanderlust is one of the reasons adventure eating has gained popularity over the past few years, said Epicurious.com Editor Tanya Wenman Steel. "Americans are venturing around the world in increasingly far-flung places," she said, trying new foods at their source.

"Eating as a blood sport has become this kind of macho quest to see who can eat the most bizarre and disgusting foods," Steel said. People have been playing with their food, and its the gross-out factor, at long-standing festivals like the Waurika Rattlesnake Hunt in Oklahoma, the Road Kill Cookoff in West Virginia.

Still, while many are trying bizarre foods just to push the envelope, others are searching for authentic eats instead of boring snacks, said Kate Krader, restaurant editor for Food and Wine magazine.

"Nonchallenging foods are being eaten by the truckload," Krader said. "We're coming out of a time of very boring food in America."

In Denver, Colorado, adventurous eaters might get whatever is left in the kitchen of Jon Emanuel, 42, founder of the Denver Adventurous Eating Club.

"As a chef, sometimes opportunities land in your lap," he said. "You get assorted pig parts or the random case of tongues. In these types of times, this is a responsible way to eat."

Recently, he has enlisted the local restaurant community. The group's next meal at Opus restaurant will include frog curry, pork brain lettuce wraps and balut - a fertilized duck egg popular in the Philippines, poached or deep-fried, that contains a partially formed embryo.

One attendee, upon reading the menu, sent a message to Emanuel: "You had me at embryo."

While some may find the eating of brains and embryos unsavory, Emanuel said the point of adventurous eating for many is to try something new, not to get involved in the ethics of eating.

"It's not for me to judge whether or not it's right or wrong," he said. "How else are you going to be exposed to these bits and pieces of culture?"

One ingredient that both Krader and Steel agree could be the next big culinary delight is insects. Within the next decade, insect eating could be as common as sushi is today.

"Insect eating in general has gone from being perceived as an extreme sport to an inexpensive snack," Steel said.

If insects will find their place next to the green beans soon, it is only fair they should have their own eating club too. The Brooklyn Bug Biters in New York's Brooklyn borough, founded by Brooklyn-based artist Marc Dennis, specializes in concocting sweet and savory masterpieces from garden-variety insects, like silk worms and crickets. Dennis has staged several dinners where the majority of the dishes contain a sizable number of bugs.

"They're everywhere, they're plentiful, why not eat them?" he asked.

Insects, high in protein and low in fat, are a healthy way to balance your diet, according to Dennis. He says people will have to get past the "yuck factor" and educate themselves on the merits and flavors of an insect-based diet. "It's matter of taste," he said.

Experts like Steel agree. She said within the next 10 years, many bizarre food will be welcome to the table. "There are some foods that will become part of the norms to eat," she said. "Fried insects will be one of them."