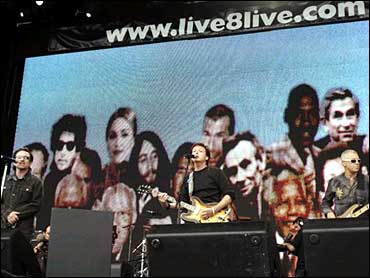 Paul McCartney and U2's Bono rocked London's Hyde Park with a rousing performance of "Sgt. Pepper's Lonely Hearts Club Band" on Saturday to kick off the main event in the Live 8 extravaganza rolling around the globe.

A thunderous roar erupted from the crowd as the two iconic performers belted out the first line: "It was 20 years ago today," a nod to the mammoth Live Aid concerts that raised millions for African famine relief two decades ago.

Well, not quite. But 20 years to the month after the mammoth Live Aid concerts that raised millions for African famine relief on July 13, 1985, hundreds of musicians were taking to 10 stages from Tokyo to Toronto, Berlin to Johannesburg for a music marathon to raise awareness of African poverty and pressure the world's most powerful leaders to do something about it at the Group of Eight summit in Scotland next week.

Organizer Bob Geldof promises it will be "the greatest concert ever."

CBS News reporter Charlie D'Agata spoke to Sting backstage at Hyde Park. The singer told him the concert is about putting pressure on the eight leaders of the richest nations of the world.

"It's about planting a seed, and those eight men, they've seen that there's a groundswell , a constituency, and we'll be watching," he said.

The first concert kicked off in Japan, where Bjork and Good Charlotte joined local bands for a concert that failed to generate much interest in Asia's only G-8 nation. It rolled on to Johannesburg, South Africa, where 24-year-old Zambian singer Lindiwe opened before a crowd of about 500 people that was expected to swell to 40,000.

In an open letter to the G-8 leaders, which appeared in several British newspapers Saturday, Geldof said the summit would disappoint the world if it failed to deliver an extra $25 billion in aid to Africa.

"We will not applaud half-measures, or politics as usual. This must be a historic breakthrough," the letter says. "Today there will be noise and music and joy, the joy of exuberant possibility. On Friday (the end of the summit) there will be great silence as the world awaits your verdict. Do not disappoint us. Do not create a generation of cynics."

In Tokyo, Iceland's Bjork made her first live performance in two years. But the crowd of 10,000 people was only half of what the hall in the Tokyo suburb of Makuhari was capable of holding.

"People are willing to go out of their way, because we believe passionately in what this is about," said Bjork. "Just the acknowledgment of the problem is an important step."

There are shows Saturday in all the G8 countries: the United States, Britain, France, Germany, Italy, Canada, Japan and Russia, as well as in South Africa, where former President Nelson Mandela was expected to address the crowd in Johannesburg. A tenth, all-African show is being staged in southwest England.

In Hyde Park, organizers and police geared up for one of the biggest outdoor events ever held in Britain. More than 150,000 people have tickets for the free show, with another 55,000 expected to watch on giant screens in the park. More than 1,000 police officers will be on duty.

"We are not expecting trouble and there is no intelligence about a particular security threat to this event, but we have planning for a whole range of different things happening," she added.

Harvey Goldsmith, one of the Live 8 organizers, said he was determined the show, featuring 25 acts, including U2, Madonna, REM, Mariah Carey, Coldplay and Pink Floyd, would go like clockwork.

"We have clocks everywhere and our message to all the artists is, we don't care what time you go on, we just care about what time you come off," he said.

"We have to be as time-precise as possible, particularly with all the international links going on. We just ask everybody to play ball."

More than a million people may attend the concerts, and organizers say 85 percent of the world's population will have access to a television, radio or Internet broadcast of the day's events.

A complex broadcasting operation will feed footage of the concerts to networks including the British Broadcasting Corp., which is devoting more than 12 hours on its main TV channels to the event, and MTV.

The artists, playing for free, are heeding Geldof's call to urge world leaders to double aid, cancel debt and rework unfair trade laws to lift African nations out of poverty.

Apart from the politics, fans debated the day's pressing musical questions. Who would have their Queen moment? The band led by Freddie Mercury were past the peak of their fame in 1985, but gave an astonishingly powerful Live Aid performance at London's Wembley Stadium that catapulted them back to the top.

Would anyone suffer the Led Zeppelin curse? The 1970s superstars reunited for Live Aid, with Phil Collins replacing late drummer John Bonham onstage in Philadelphia. The band disliked their performance so much they have never allowed it to be rebroadcast.

Few doubt it will be a memorable day, not least the ever-voluble Geldof.